Startup company Zeebo is launching a brand new video game console in developing nations around the world. Started by the company Qualcom, a cell-phone processor and chipset manufacturing company, they are hoping that people in these nations will want to play video games as much as those in first world countries.

The big kicker about the system though, other then it's low cost of around an estimated $200 US at launch, is that the only way to purchase games for the system is digitally through cell phone networks where absolutely no subscription is required. They are hoping this method will curb piracy.

The company's main target market are countries such as India, Brazil, China and Eastern Europe. Technical specifications for the system are compared to those of a Nintendo Gamecube. It features low power consumption (about 1 watt), RCA plugins capable of a resolution of 640 x 480, three USB slots and is about the size of the Xbox 360 power adapter. Obviously these specifications are up to snuff here in North America, but systems like the Sega Genesis still do very well in sales in countries like Brazil according to Zeebo's Vice President of business development and licensing, Reinaldo Normand.

One of the most encourage prospects of the system are the developers that have already jumped onto the product. Electronic Arts (probably could have guessed that one...), THQ inc., Activision-Blizzard, Namco and Pop Cap are just to name.

The games itself are set to cost around $10 US and titles already include Fifa, Double Dragon, Sonic Adventures, Resident Evil 4, Quake are just a few of the bigger names that will on the system.

A lot of people are comparing this system to the Phantom, another system that attempted the digital distribution model, that never seemed to ever get off the ground, but key difference seems to be the target market. As oppose to the Phantom, that went after the already crowded U.S. market, the Zeebo is going after the developing market.

The console is planned to hit Brazil first. 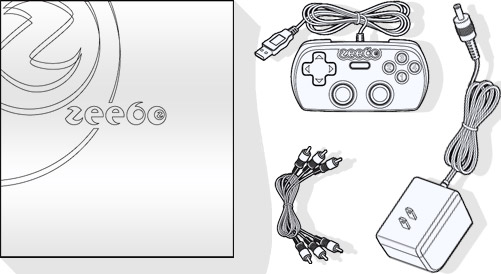