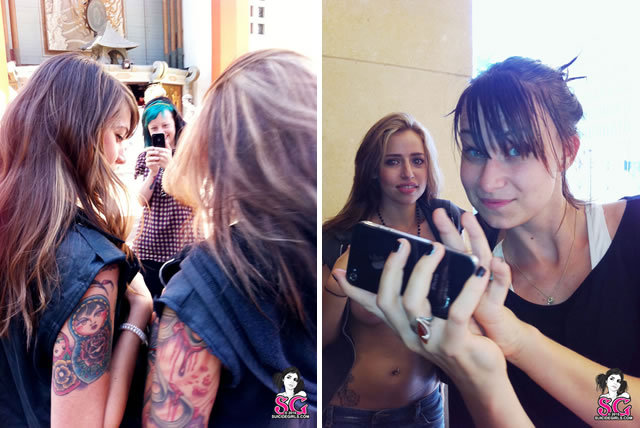 Although Apple has yet to reverse its stance on censoring what can be considered pornography, content providers are still embracing the device with open arms.

Missy, at body-modification adult photography portal SuicideGirls, has gotten her decidedly raunchy hands on iPhone 4. SG's review focused mostly on the new camera and screen of the device, highlighting not only the clarity of nipples at 4x pixel density but the tendency of areolas to evacuate themselves from sweaters when the device is pointed in the direction of model "Rambo."

SuicideGirls are no stranger to the iPlatform. The portal has produced two Apps to date: Flip-Strip and Seduce-a-SuicideGirl. The first app, which acted like an old-fashioned nudie-pen, featured models fully clothed that revealed their underwear when the phone was flipped. This app is no longer available as it did not fall under Apple's seemingly phase-changing and selective censorship rules. The second app is even tamer and hasn't been banned yet. It allows the user to pick up girls at the comic-book store without the secondary feature of getting shut-down. It is very similar to the popular Japanese flash-based dating games that were once very prevalent on the Internet.

With their review of iPhone 4, SG seemingly holds no grudge with Apple. The review continues in a shamelessly promotional yet strictly artistic and professional fashion. An entire gallery of comparison shots is included, demonstrating such features as flash, "Camera Twist" for lens selection, and even an in-depth demonstration of the device's video capture capabilities. By "reviewing" the device, SuicideGirls is still riding the exposure that the device offers while still staying in Apple's good graces.

SuicideGirls has also developed an iPad gallery in another attempt to make their content available on the highly popular platform. In the future, we can expect that SuicideGirls will not be the only providers finding creative ways to ensure that their content is available through the iPlatform. Pornography and even racy content is ubiquitous across the Internet; regardless of censorship or guidelines, people can and do distribute/produce/provide adult content. It is up to the community to decide what is acceptable, not the platform creator, as the wholly inappropriate content will disappear or fade into the underground, while content that is more acceptable will gain ground.

This phenomenon is not contained to just the iPlatform, and will continue to exist for as long as there is a demand. Although Apple's moralistic approach to content delivery has been lauded by some, it should be up to the free market to decide what is available and what is not. When a single entity unilaterally decides the availability of media and content, a slippery slope of censorship can be created. Fiction such as V for Vendetta and George Orwell's novel 1984 begin to feel not so far off, as well-meaning authorities lose sight of their original purpose and control what their "subjects" have access to, in order to further a specific agenda.

Apple and their "freedom from porn" manifesto is old hat. It has been discussed at length and the company does not seem to be changing their stance, regardless of the outcry. The company is very insistent with their policy against pornography and its moralistic vendetta has been lauded by those who are offended by adult material. The issue here is not the content that they are censoring, and that seems to be the issue that the majority of those with defined opinion seem to miss. Censorship in any form may be wrong, but it is a part of life. There will always be individuals and organizations that attempt to impose their will on others, and it is up to the "others" to decide what they will and will not allow. Only through proper protest (i.e. "speak with your wallet") can change occur.

Apple's current policies are profitable, so they have no incentive to change. They are not evil; they are still a business. Even if you do not agree with their policy, it is still sound financially, and to force a change you must respond as a customer.  The content itself may be objectionable to some, and pornography is a very easy target for censorship just as explicit sexuality (not specifically of the hardcore variety) is still a taboo for much of the Western world. We still live in a civilization where a topless female in public sparks controversy, so censorship of this kind of content becomes "preferable." Where does it stop though?

If a company unilaterally begins to censor material based on what it sees fit for consumption, where will it go from there? Are ideas next on the docket? Will Apple have a ban against homosexuality next? How about Liberals in general? Whether or not you are a consumer of pornography, it is not hard to understand that blatant censure violates the rights of those that WOULD like to receive specific content.

With a platform as large as Apple's iDevices, this is no longer an issue of a small group censoring content to a small user base, but an organization that has a user base with the population of some nations. Apple's user base is not confined to one country or one set of laws. It is not governed by a single religion or implied moral code, so they have developed their own. A private entity does not have the inherent right to limit the rights of others, even if they do so on a level of moral justification. There is constant outrage to politicians and religious leaders imposing their will on others, so why is it being tolerated at the business level? Although not legally recognized as a political entity, Apple's sheer size enables them to distribute their ideology to a large group of people in a very strictly controlled and enforced environment.

That is a scary thought.

SG's continuous efforts to promote their content and enable users of the iPlatform to access their material is only a small drop in the information freedom bucket. Apple makes great products that have benefited a large segment of the population, and they should continue on their path of enhancing the lives of their users. Efforts from SG, other content providers, and on a larger level, the Jailbreak and software development community, will enable a positive equilibrium to be achieved between a monolithic corporation's ideals and the needs, wants and desires of its users. Android and Microsoft are also entrants into the mobile market, and with that competition, a stable ecosystem for all users regardless of their product affinity is not far off. Apple and others have tried DRM, yet the war between freedom of content delivery and piracy still wages on, and freedom will always prevail. It just takes time and evolution to happen.

Unintended, the girls may have found the best use of the device yet. Hopefully the SJPD lighten their stance on obvious artistry.