Queues were extremely long for both stores report witnesses. Microsoft store employees handed out free t-shirts, skateboards, gig tickets and even some free laptops to hundreds of visitors. Joe Wilcox, writer at BetaNews.com, spoke to several teen girls who admitted they came just for the freebees. In comparison Apple Store visitors were waiting in line to shell out hundreds of dollars on a brand new iPhone 4. The mood at the Microsoft store was a lot more upbeat with visitors chanting "Microsoft" repeatedly and cheering when the store opened. 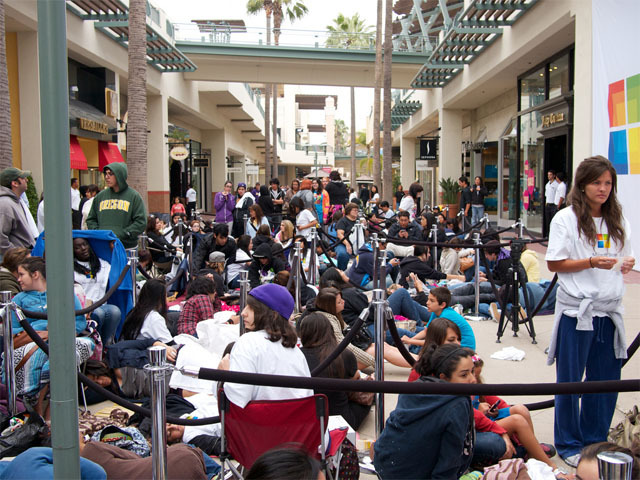 Despite the iPhone 4 launch Microsoft seems to have successfully taken Apple's retail model and mirrored it so far. Microsoft has introduced the Kinect gaming system to its four stores so customers can be the first to play the new controller-less system, due to launch in November for Xbox 360.

Microsoft's San Diego store is the fourth, joining the first two locations in Scottsdale, Arizona and Mission Viejo, California and recently opened Park Meadows Mall in Lone Tree, Colorado. Microsoft is also planning to open a fifth store in the Seattle area. The Microsoft Store's offer all of the Microsoft products found through online retailers and inside major retail chains, including keyboards and mice, Windows 7, Xbox360 and many more products. Apple currently has 222 stores in the United States alone, and 287 total stores worldwide, including 27 in the UK and 14 in Canada.