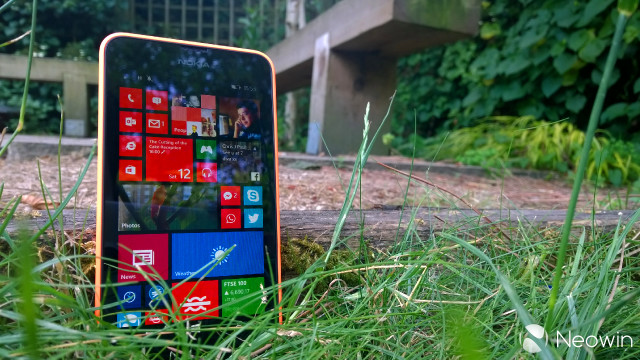 Microsoft is busy busy busy, launching updates and phones left and right and it looks like their efforts are paying off. According to the latest report, based on AdDuplex data, the newest Windows Phones, the Lumia 630 and 930 are doing quite well in the market, while Windows Phone 8.1 is gaining significant ground.

Loyal readers know we occasionally take a look at the latest data coming from our friends at AdDuplex. This is a cross-promotion network that’s employed by thousands of apps, so by analyzing it we can get significant insights into the Windows Phone ecosystem.

The latest report that came out today looks to have some good news for the newest Windows Phones on the market, as well as the OS in general. 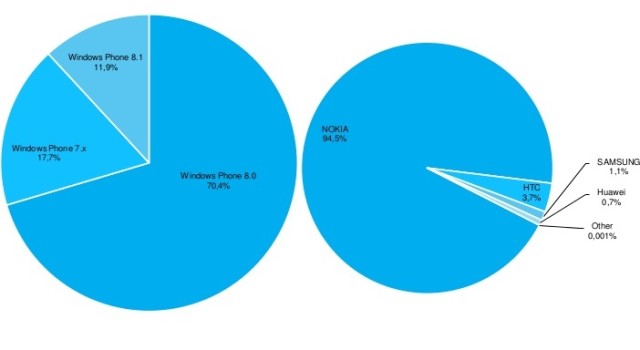 First up, Windows Phone 8.1 is gaining a lot of ground. It has jumped up by 4.2% since last month, meaning almost 12% of users are running the latest version of Microsoft’s OS. Considering the Cyan/8.1 update roll-out is currently in full swing, this number is bound to jump a lot higher in the next few weeks. We’ll also be keeping a close eye on the GDR1 adoption rate, starting next week.

Moving on to OEMs, Nokia is still dominating the Windows Phone landscape. It has gained another 0.7% bringing it to almost 95% of market share. However, there’s some good news here, as the data also shows lots of new devices from many new OEMs. The thing is though, they’re not in the market just yet, so they’re barely registering. Despite that, we’re confident this picture will start to look different in the next few months.

As for devices, there’s good news here too. The new Lumia 630 – one of the most affordable Windows Phones – is seeing decent adoption rates. The 630 and related models are gaining traction despite the fact they’re just now becoming widely available. 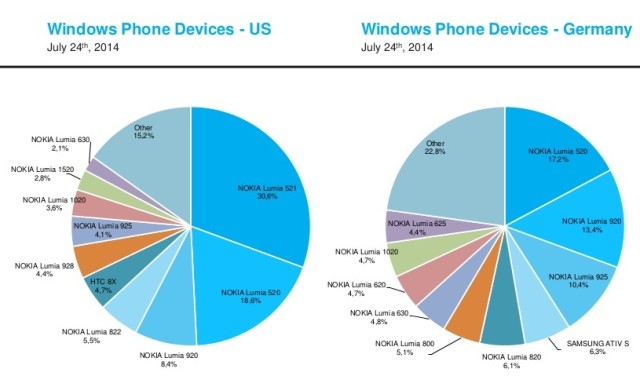 The Lumia 630 made its way into the US charts straight at number 10 with 2.1% of the market. Similar results are seen in France where the Lumia 635 is now in the top 10 with 2.5%. Going over to Germany we see that the Lumia 630 sits comfortably at number 7 with almost 5% of the market. Finally India, a major market in its own right, is seeing similar adoption rates with the affordable device jumping in at 3.7%.

Considering this device is just now getting its proper worldwide launch, these results are very encouraging. And they actually track the Lumia 520 from last year, when that affordable handset became the superstar of the Windows Phone ecosystem, and it’s still dominating today.

Finally we’re seeing some unreleased devices being tested around the world. First up is the LG D635 which looks to be a mid-range phone with a 5-inch 720p screen. This fits nicely with previous rumors regarding LG’s return to the Windows Phone platform.

There’s also a HTC model on the way, with the inspiring moniker “HTC6995LVW”. This is most likely the long awaited HTC One (M8) Windows Phone variant. The device seen here is a high-end phone with a 5 inch screen and 1080p resolution. Unfortunately it looks to be a Verizon exclusive for now.

And lastly there’s the Nokia RM-1038/1039 which has a 720p 4.7-inch screen. The device is being tested globally and looks to be “Superman”, Microsoft’s rumoured selfie-phone.

Considering all the good news alongside wider availability of Cortana and the launch of GDR1, the second half of the year is set to be pretty great for Windows Phone users.

You can check out the full report at blog.AdDuplex.com