A leaked document online shows that the Samsung Galaxy S5 is slated to get an update to Android 4.4.3 later this month and that its predecessor, the S4, can expect it next month.

The latest update to the popular mobile operating system began rolling out to Google Nexus and Motorola devices earlier this month. It makes sense that the largest manufacturer of Android devices (and indeed smartphones in general) will begin rolling out updates to its flagship handsets as quickly as possible after launch.

Although there are no major changes, bug fixes are in plentiful supply and the Dialler has been redesigned. This won't be present in Samsung's update though as the dialer is customized through TouchWiz. 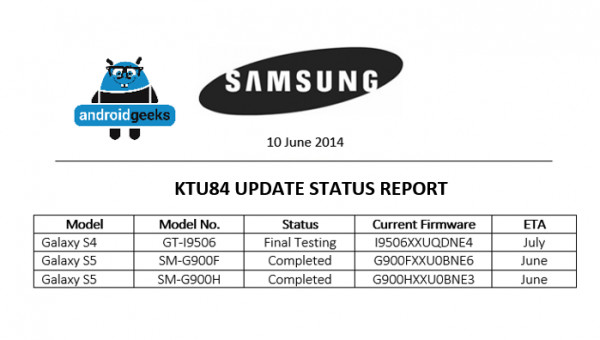 Android Geeks warns, however, that although the dates sound as though they could be correct, the document originated from an anonymous tipster and advise to take the report with a pinch of salt. It does looks similar to other leaked internal Samsung update documents though that haa since proved correct so it could be a matter of just days, or at most, weeks before both S5 and S4 owners are running the latest edition of Android once again.