Whenever we can, usually at the weekend, we showcase a hardware review submitted by a member in our forums. Remember that we consider all reviews that are submitted here. So if you've recently bought a new gadget and you're impressed (or even disappointed) by it, let the community know by submitting a review about it; your review might make the front page next week! The more detailed and complete the review is, the more likely it will be selected.

This week mrk makes another appearance, this time reviewing a LG 34UM95-P UltraWide monitor with loads of beautiful pics, so without further ado, let's get into it.

I got a HDMI lead and Displayport but since I recently bought one and already had it wired up I never unwrapped the bundled cables.

The stand is actually metal, the only plastic bit is the trim panel parts along the top. It's quite heavy too. In videos and pics I've seen online it looks plastic. I threw that back in the box because I wasn't going to use it..

This smaller pic does not do it justice - click to enlarge

It's huge. bigger than I thought it would be in fact and it's heavy. It comes with a little energy star sticker on the bottom glossy plastic bezel bit (the only bit of bezel on the front really) and as I peeled it off it left a residue. I started to wipe off the residue and noticed that the glossy black plastic area was becoming marred/cobwebbed like black plastic does once it ages. I hate that and it's a shame. Picture of that area below: 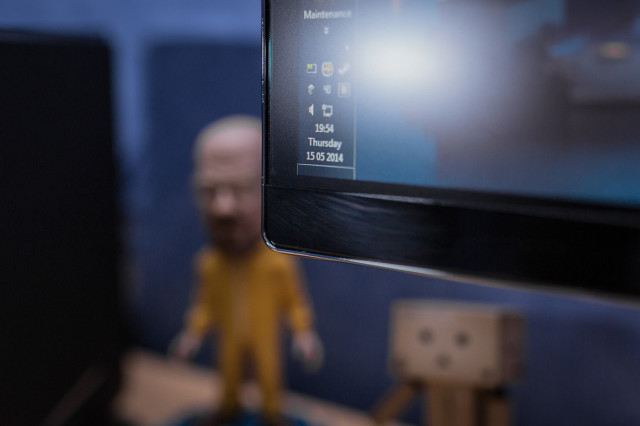 Why give you a protective sticker for the VESA mount and then put a sticker on the bezel which leaves residue? Kind of a half-assed oversight in my books. I'll end up brushing the whole strip so it's matte instead of glossy in time though so it won't be an issue again.

Read the full review in our forums ->