The flat design has been around for quite some time now, but had only recently came to iOS devices when 7.0 shipped last year. Although the Mac OS X desktop interface hasn't changed much, it's going to receive many of the aesthetics from iOS 7.0 when OS X 10.10 "Yosemite" is released this fall. Of course, iOS and OS X are not the only Apple products that are expecting some improvements. Following the iOS 8 and OS X "Yosemite" beta updates that was released today, the company unveiled the new iTunes 12 beta that brings some visual changes, as well as an anticipated feature. 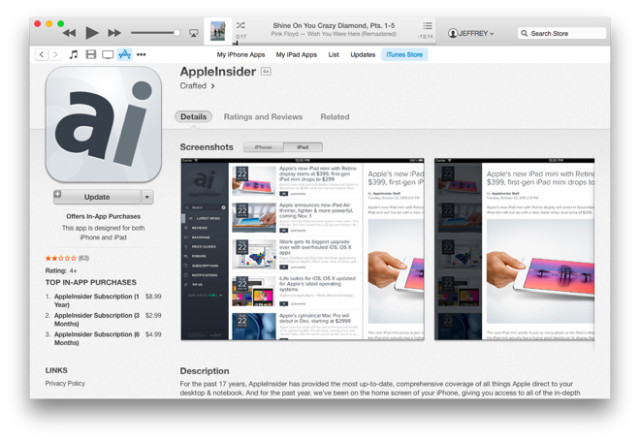 The beta build of iTunes features a flatter design, similar to what we have seen in "Yosemite," and much less surprising, is only available for users with a developer preview of the unreleased OS. Apple has also simplified the experience even more by reorganizing the buttons for Music, Movies, Apps, etc, while hiding some of the lesser-used options. Along with the new design, Apple has added the Family Sharing program, which allows up to six family members to share content, as long as they use the same credit card information. This is great news for users that do not wish to purchase their favorite content again for use on other accounts.

It seems that Apple is headed in the right direction by rolling out a more simplified interface with a streamlined design across all of their platforms. With all of the improvements being made to iTunes 12 and OS X, it looks like  "Yosemite" could prove to be a hit when it launches this fall.