Microsoft has detailed in a comprehensive PDF the new changes and improvements that have been made to Bing Maps in the July 2011 Bing Maps update. As the Bing team nicely states: “So what did we change? Simply put, we made things easier to see.”

Bing has cleaned up its mapping interface and made the important stuff more easily visible. Primary roadways are now marked with a more prominent color, one way streets have been made clearer to the user and the overall color tone has been kept cooler. As Microsoft reminds us, four out of five users see data layered over Bing Maps, and through using cool colors for the maps and warm colors for pushpins and other bits of data, users won’t be confused and important data is made more prominent 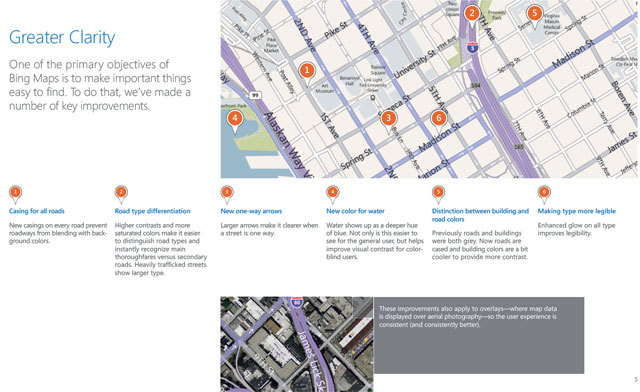 The July 2011 update also aims to provide greater clarity with Bing Maps: “One of the primary objectives of Bing Maps is to make important things easy to find. To do that, we’ve made a number of key improvements.” These again include adjusting road colors, deepening the blue of the water and enhancing the glow on text.

Microsoft have also adjusted the amount of detail shown at each of the 18 (or more) levels of zoom, which in the PDF (available here) are specifically detailed. Improvements include showing detail based on population density and more scalable map shields. Country-specific road shields have also been updated for 24 countries, and Microsoft have now added more than 300 maps for the interiors of the largest US shopping malls. 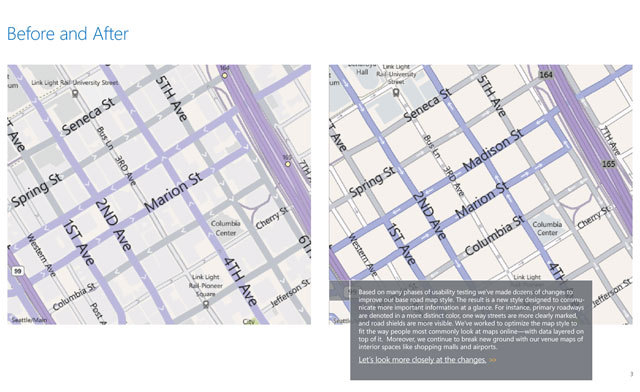 A lot of the changes Microsoft and the Bing team have implemented into the Bing Maps July 2011 update are minor, but when added up do provide a clearer and more user friendly approach to mapping. Clearly Microsoft have done their research and are trying to improve their map service while catering for their target audience. It's worth noting that this is expected to land on Microsoft's phone platform, Windows Phone 7, but we are yet to see the tile refresh there.