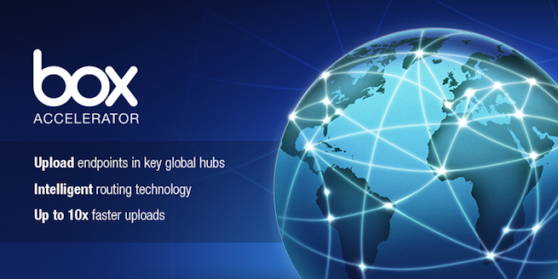 Everyone loves to go faster. Today, the business themed cloud-based service Box announced a massive speed increase for its customers that should make them very happy. The service is called Box Accelerator, and the company claims that it will allow upload data speeds that are up 10 times faster than previous speeds.

International users near one of the new network endpoints, whether they’re in sight of the new Box office in London or just getting things done in Sydney, should see the biggest speed increases when uploading content to Box. Located here in the US? Not to worry – we’ve also placed Box Accelerator locations in the Northwest, Midwest and on the East Coast so nearly everyone will experience quicker file uploads.

The post adds that Box Accelerator will cut down the average time it takes to upload a several hundred MB file from an hour to about six minutes. Box competes with other services such as Dropbox and Google Drive in terms of business users. Microsoft has its own SkyDrive cloud service but has marketed it mostly for consumers, although there are rumors that the company has plans to launch a SkyDrive Pro tier at some point.