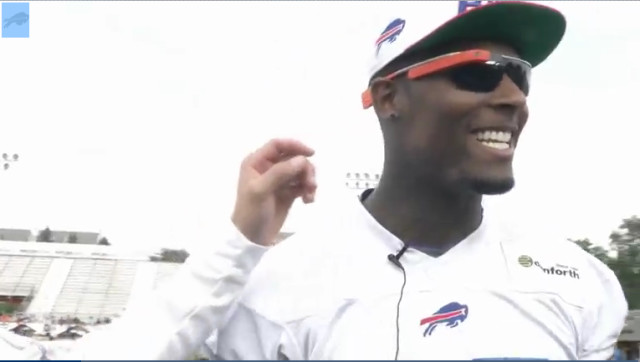 "These shades make me look cool" - Not said by Stevie Johnson

It's no secret that Google hopes to revelutionize the wearable computing market with Google Glass, and is expected to release the product to the public by the end of the year. Although the release date is close and there are many videos online, most people have yet to see what the technology is capable of in person.

Someone gave Buffalo Bills wide receiver Stevie Johnson Google Glass to try out in training camp, and he comes away very impressed with the latest technology. At the start of the video, he's being taught how to take pictures with a voice command. After some minor technical difficulties, the excercise works and Johnson says, with a big grin on his face, "Wow, that's crazy!" Later, Johnson is playing catch with fellow teammate Brad Smith, and the resulting video looks like something you'd see in a video game. Next up, Johnson starts signing autographs for a bunch of fans, one of which notices the new technology. When asked about it, the star receiver says, "They're crazy. They're fresh. Check the Buffalo Bills website to see yourself on it."