The last expansion for Civilization V, Gods & Kings, was a revelation for many players. It reintroduced Religion and Espionage to the addictive turn-based game of national dominance, with the two features having appeared in Civilization IV beforehand. We've known about the Brave New World expansion for some time now, but Firaxis saw fit to share more info at PAX East.

At PAX we discovered two of the new civilizations being added into the game, meaning we now know three of the nine. Those three are as follows:

This is the first time that any of these three empires have been part of the franchise. Rio de Janeiro is currently a city-state within the game. When Korea was added the city-state of Seoul was removed, so it seems plausible the same will happen here. 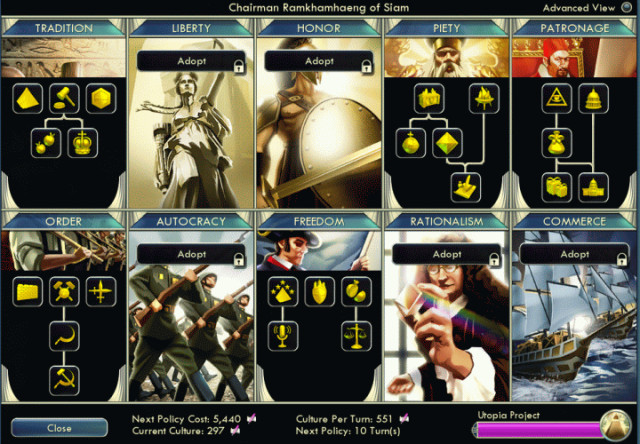 With the Cultural Victory being revised, two new Great People are being added to the game. The Great Writer and Great Musician will both help to expand ones cultural influences, since the new victory relies on spreading your culture across the world instead of cranking out Culture buildings and clicking the Utopia Project.

There are also some interesting new units being added, in the form of XCOM troopers. These XCOM troopers act as upgrades for Paratroopers. It's worth considering this point since some players have complained about the game feeling stage at this later point, with a clear-cut winner normally having emerged.

The XCOM units might seem a little bit absurd, but remember: the Civilization titles often include silly little things, like the Giant Death Robots and the steampunk inspired 'Empire of the Smoky Skies' scenario. Brave New World will be adding another two scenarios, but it remains to be seen if the new scenarios will be as "out there".

Better than reading about it, if you've time to kill, here are two videos of the game in action. We can't promise they'll be available forever, though.

If you're excited, Brave New World launches on July 9 in North America and July 13 globally. It'll likely be around the same price point as Gods & Kings, but if you're savvy you can snag it for less. Since Steamworks is the DRM all you need is a key, so be ruthless when picking a retailer.