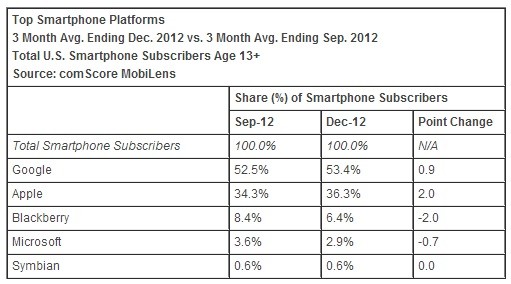 ComScore's data for December 2012 smartphone market share in the United States has been released, and it shows that Microsoft's smartphone platform actually lost market share for the three month period ending December. Windows Phone, combined with Windows Mobile, dropped 0.7 percentage points to hold 2.9% of the market at the end of 2012, joined by BlackBerry which saw a more considerable market share drop of 2.0% for the period to end up with 6.4% market share.

Unsurprisingly the winners for December 2012 were both Android and iOS, which gained a further 0.9% and 2.0% of the US market respectively, ending with 53.4% and 36.3% market share. For smartphone OEMs, Apple still reigns king with (again) 36.3% of the market, however Samsung managed to claim the greatest rise in share, jumping 2.3% to hold 21.0% of the market. HTC and Motorola, which claim third and fourth spots respectively, both saw market share declines, while fifth place LG gained 0.5%. 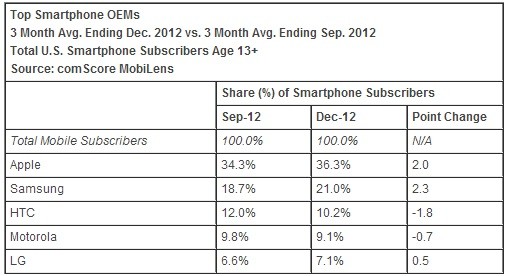 While Windows Phone's worldwide market share continues to rise, it has been seemingly difficult for Microsoft to penetrate the United States market with any sort of force even with a wide range of devices available on carriers. It may take another generation of Windows Phone 8 devices to see tides change in favor of the platform, with new devices potentially going to be unveiled at MWC later this month.