Microsoft is once again coming out on the offensive against Google, warning users not to get "Scroogled" by Gmail and its practices of scanning through potentially private emails for keywords it can use to sell ads. The campaign is an attempt to get users to switch to Outlook.com, which "prioritizes your privacy" and will not sell you ads based on the contents of your personal emails. 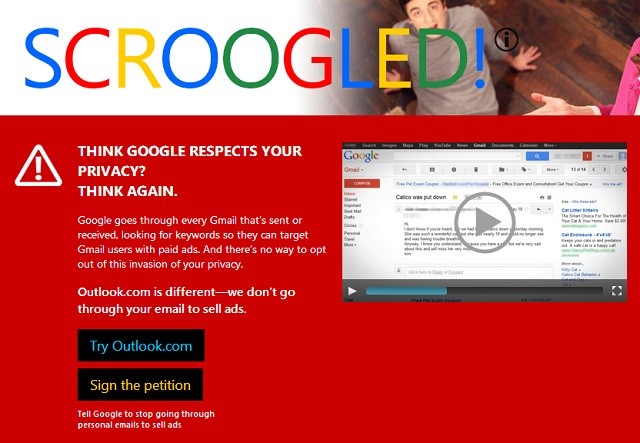 In a press release pushed out today, the Scroogled campaign is also an attempt to educate Americans on some of the bad practices used by email providers. A study commissioned by Microsoft reveals that 70% of consumers "don't know that major email providers routinely engage in the practice of reading through their personal email to sell ads", while a larger 88% disapprove of the practice.

As well as releasing a website to accompany the campaign - which you can visit at scroogled.com - Microsoft is encouraging people to sign a petition to get Google to stop violating privacy by reading emails to generate ads. The petition aims for 25,000 signatures, and naturally Microsoft are hoping that a number of signatories will switch to Outlook.com for their email.

Now Microsoft isn't exactly completely in the clear when it comes to email privacy, as the company does monitor web searches performed to tailor advertisements in Outlook.com. On the Scroogled website, Microsoft are conveniently not advertising this fact, instead focusing on how Google scans the entire contents of your inbox, including the entirety of send and received messages, to sell ads.

Previously Microsoft has used the "Scroogled" catch-phrase to warn users against Google Shopping's practices, but today sees the campaign expanded into a much wider attack on Google and their advertising methods. Gmail has been targeted this time around, but it's likely more services will be highlighted in future campaigns.