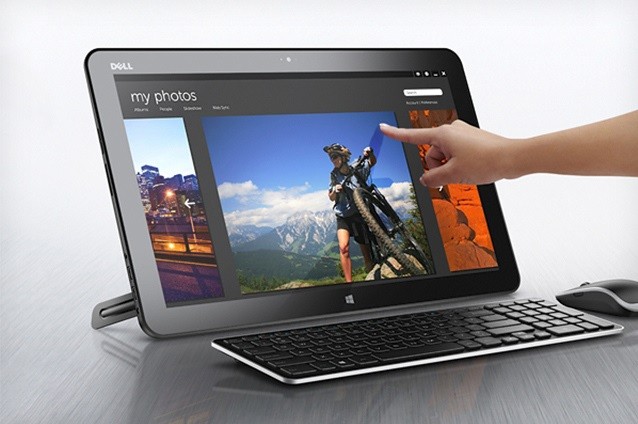 Today Dell has taken the wraps off a brand new portable all-in-one/tablet system, similar to Sony's Vaio Tap 20, that it's dubbing the XPS 18. The device is a Windows 8 desktop all-in-one with an in-built battery that's rated for five hours of use, allowing you to convert it (using the supplied kickstand) into a number of forms, including a fully-flat tablet; alternatively you will be able to dock the XPS 18 into an optional stand for use as a traditional all-in-one.

Specifications wise, the entry-level model will be decked out with an 18.4-inch 1920 x 1080 touchscreen display, an Intel dual-core Pentium ULV processor, 4 GB of RAM and a 320 GB hard drive. For a bit of extra cash you can upgrade this machine to include up to 8 GB of RAM, a 512 GB solid state drive, and an Intel Core i7 processor. Overall, the system is much smaller than the Vaio Tap 20, weighing just 2.2 kg (4.85 lb) and coming in at under 18mm thick.

The all-in-one/tablet combo will be available next month for $899, which will get you the aforementioned base model plus a Blutetooth keyboard and mouse, similar to the Vaio Tap 20. When we reviewed the Tap 20 we thought it was an interesting form factor marred by a poor execution, although Dell's machine here is thinner and lighter, which may make it a better option for a portable Windows 8 all-in-one.