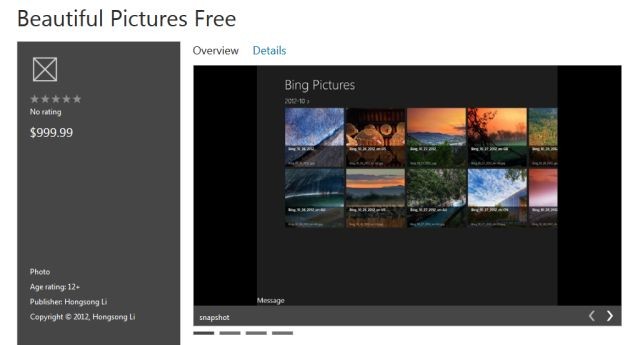 There are a few Windows 8 apps that have some pretty high prices. However, they tend to be for software that is designed to be used for very specific tasks. In fact, we recently did an interview with the CEO of Pariscribe that has a Windows 8 app in the store made for use in medical offices that's priced at $499.99.

Now it looks like, at least at the time of this writing, there is an app in the Windows Store that has an even higher price. Unfortunately, this appears to be a rather large error on Microsoft's part. The app is called Beautiful Pictures Free, and its purpose is to download the background images from Microsoft's Bing website to a PC.

The developer of the app, Hongsong Li, flat out says in the description on the Windows Store page, "This is Free Version and may contain ads." However, Microsoft currently lists the Windows 8 app in the store for a massive $999.99.

We very much doubt that the developer of this app wanted to charge this kind of price for something called Beautiful Pictures Free. We have contacted Microsoft to see if this is, in fact, an error and if so do they plan on fixing this issue.