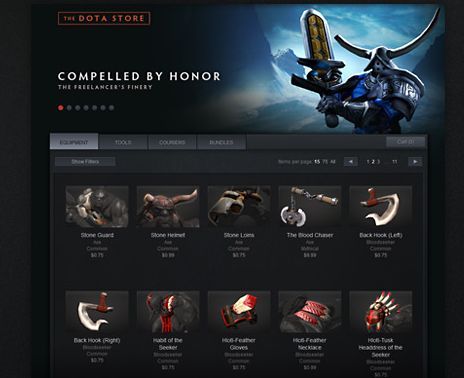 It's not exactly a shock, but Valve has confirmed that its upcoming and long awaited action-RTS game DOTA 2 will be a free-to-play game when it is officially launched later this year for the PC.

The announcement was made on the game's official web site on Thursday. Valve also says that while DOTA 2 will be free-to-play, it will also have an in-game store where players can purchase cosmetic items for their DOTA 2 characters.

The store items won't affect gameplay in any way. Indeed, Valve said that when DOTA 2 is officially released, all of the game's heroes will be able to be accessed. Valve states, "We believe restricting player access to heroes could be destructive to game design, so it’s something we plan to avoid."

Much like they did with Team Fortress 2, Valve is also allowing its community members to submit content for the DOTA 2 store via the Steam Workshop. Those creators will get a cut of all revenues generated from their DOTA 2 items. Valve states, "In the first year alone over 3.5 million dollars was paid out to TF2 fans who’s creations are now a permanent part of the game."

DOTA 2 is still in closed beta. In an FAQ page, Valve explains why they can't just launch the game to the public, saying, "Right now we're working on expanding our server infrastructure, which is the primary bottleneck."

Valve also plans to hold a 16 team invitational DOTA 2 tournament in August at PAX, with the winning team receiving $1 million.