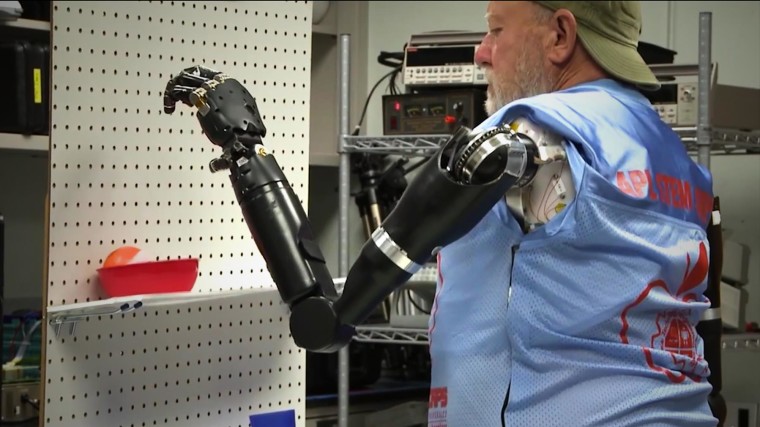 It's absolutely fascinating to see technologies that were once only imagined in movies and television shows become our reality. For Leslie Baugh, who suffered a tragic loss of both of his arms during an electrical accident 40 years ago, what was once science fiction has become a part of reality.

The John Hopkins University Applied Physics Laboratory successfully created and tested a system that reads brain functions and relays information up to two robotic limbs, allowing someone like Leslie the ability to control arms as if they were his own. With the help of John Hopkins University, Leslie became the first bilateral shoulder-level amputee to both wear and operate two robotic arms using nothing more than his own brain to operate them.

After being fitted for a harness in which the arms are meant to mount upon and undergoing surgery for "targeted muscle reinnervation", Leslie Baugh successfully performed several general tasks that required the coordinated use of two prosthetic arms using only his thoughts to control the arms. The range of motion is said to be comparable to a human arm, with the only noticeable difference being that a user would have to control certain positions of the robotic arms such as rotation and elevation one at a time (instead of simultaneously like a human arm is capable of).

The technology is still being developed for greater use, but as the video in this article will show: this technology is nearly ready to be rolled out. With more time and study, we could soon see this technology advance to a stage where Luke Skywalker's life-like prosthetic hand seen at the end of The Empire Strikes Back leave the world of fiction and become our reality.