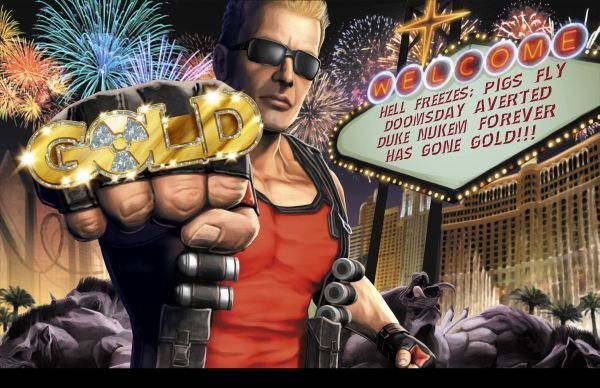 Friday is the day that members of the Duke Nukem Forever First Access club will be able to download and actually play a free demo of the long awaited first person shooter from developer Gearbox Software. However, that's not all the club members will be able to do. Tonight members received an email announcing that folks who have pre-ordered the game or purchased the Borderlands Game of the Year edition will also get something for nothing.

That something is the first multiplayer DLC pack for Duke Nukem Forever. First Access club members will be able to get that DLC pack for free when it is released. Details about the pack, such as number of maps and other additions, have not yet been revealed. The release date for the DLC pack has also not been announced nor what non-First Access club members will have to pay for it.

Meanwhile the game itself is getting closer and closer to being released. The 13 year long wait for the full game is scheduled to end on June 10 in other parts of the world while North American players will have to wait until June 14 to get their hand on the game in its PC, Xbox 360 or PS3 versions. If you happen to be in the Dallas, Texas area on June 11, you will be able to play the full version of Duke Nukem Forever as part of developer Gearbox Software's community day. The event is free to attend but you must register first at Gearbox's web site.