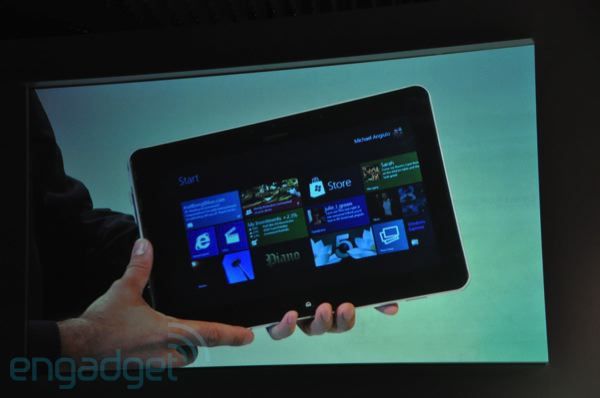 Hot on the heels of the All Things D announcement earlier today, Microsoft has shown off Windows 8 again at Computex, showing a few features in full swing, and revealing more details. It appears that Microsoft has a lot more to show off then we expected.

The biggest surprise is that whilst Microsoft claimed that the immersive interface would be primarily used for tablets, they're showing it off on desktop PC's and conventional laptops too. It's not quite clear if that is the default, but its definitely an option. Instead of touch, the page up and down buttons allow you to navigate tiles and left and right to pan, as you would expect. In the image below, it shows PC's running the immersive UI, all the way down to a tiny tablet. We assume they're implying it's all on touch screen devices, but we've seen them demo some non-touch devices today too. 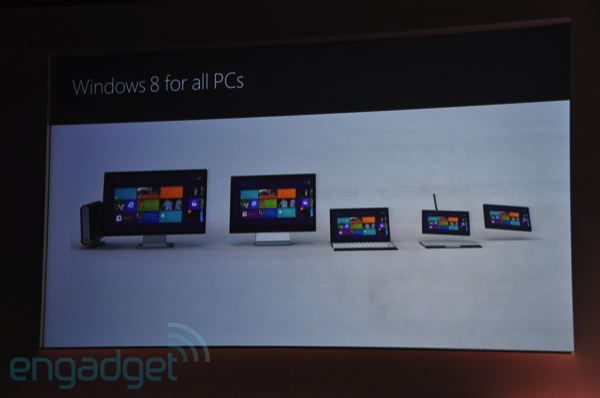 Microsoft showed that the new "immersive" UI can be run side-by-side by the conventional Windows shell, and the immersive UI is fully optimised for touch. The demo shows off new ways of managing files for touch based devices, but also shows that conventional file management is still available, too. If you look at the second screenshot below, the ribbon UI is enabled there, but slightly hidden. 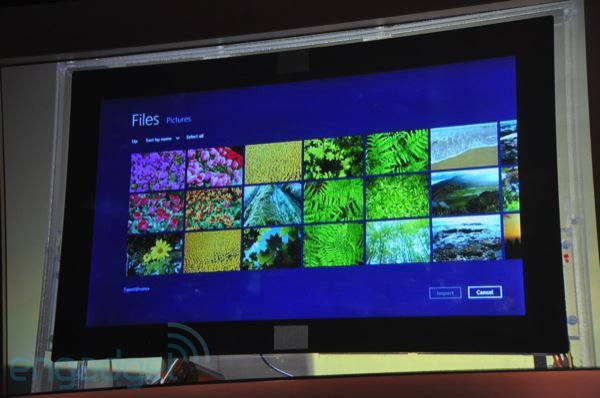 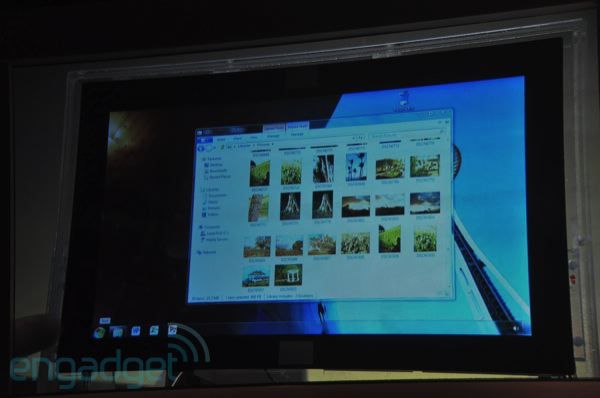 The demo showed off full USB support, even for ARM based devices, on a Dell device.

IE10 for tablet devices was also shown off, with the company touting tab management that looks almost exactly the same as the Windows Phone platform, and loads impressively fast. Microsoft is continuously emphasizing that the same version of Windows will run on all their devices. 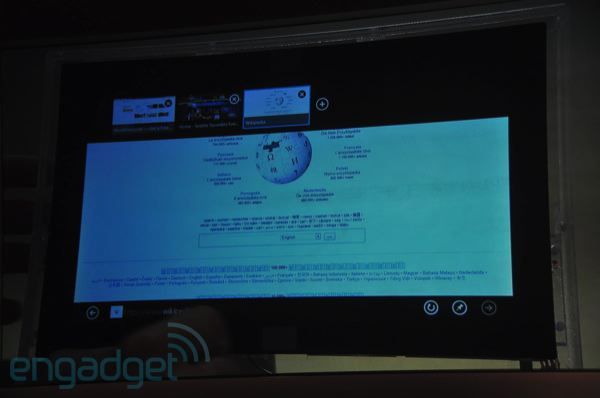 The company reiterated it's SoC (System on a chip) device support in Windows 8, and showed off a tiny Snapdragon chip to show how small the things really are. They also pointed out that all applications that exist on Windows now will run on ARM devices, and showed off a super thin device sporting an nVidia quad-core chip named the "Kal-El." 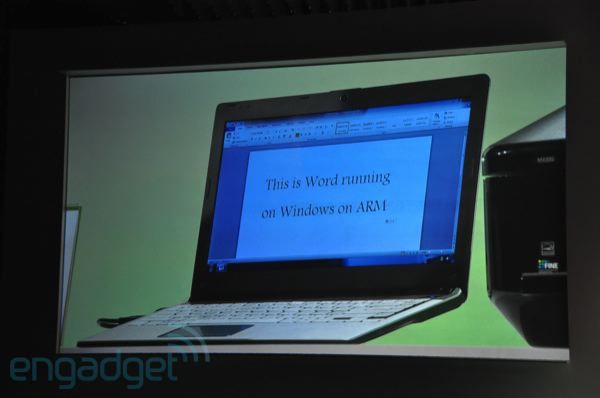 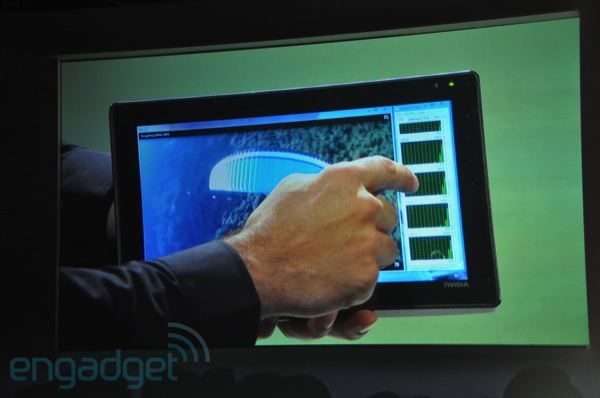 Pictured above is a tablet device running the same nVidia chipset, able to perform heavy tasks such as HTML5 hardware accelerated support. Pictured below is Microsoft showing the same applications running on two different devices, an ARM based tablet and a desktop PC. 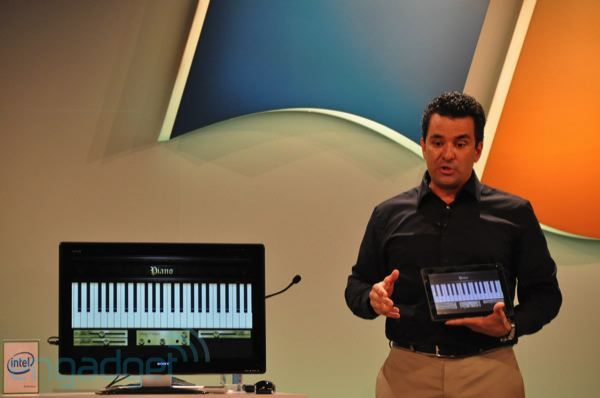 We heard earlier today that Microsoft was posing strict rules on Tablet OEM companies, and this seems to back it up, with the company saying they started engineering the systems with a "closer integration of hardware and software than ever." Sounds like a control process similar to WP7 to us. Tablet hardware requirements are a minimum of 1024x768, but 1366x768 required for "best" experience. 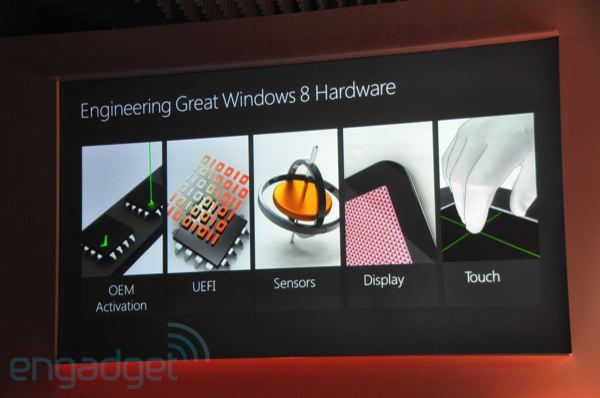 Microsoft also are pointing out that the exact edge of the device must be a sensor, so the sensitivity begins on the glass bezel for gestures. It's good to see Microsoft pushing OEM's to make good hardware, rather than taking a hands off approach. 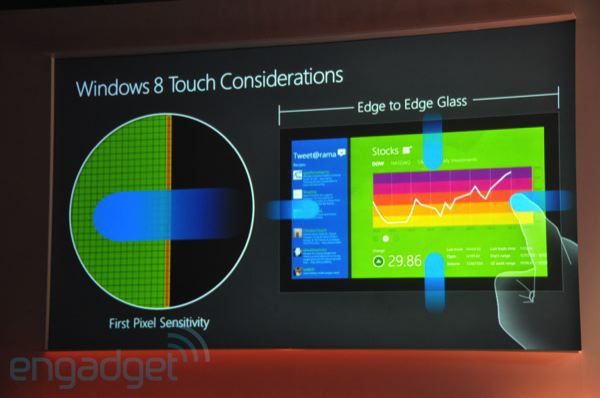 At the end of the event, Microsoft again pushed "Build" in September, which will have "everything" about Windows 8. Make sure to put that one in your diaries now. Check out video of Windows 8 in action here, or further details from this mornings event at All Things D here. The video from the D9 event this morning is embedded below: