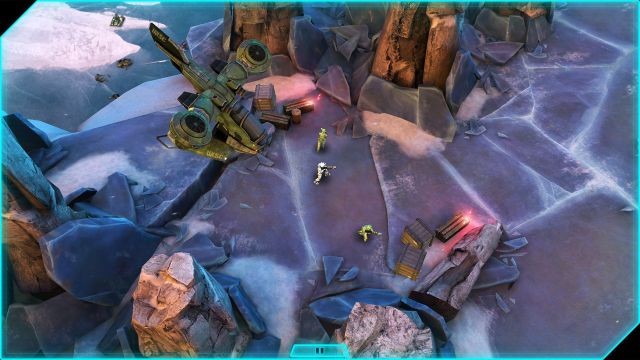 While Microsoft is working on a new Halo game for its Xbox One game console for a launch in 2014, the next game in the sci-fi series will in fact be released for Windows 8 and Windows Phone 8 in July. It's called Halo: Spartan Assault and we were able to sit down and play two missions from the game on a Microsoft Surface tablet during E3 2013.

The game, co-developed by 343 Industries and Vanguard Games, is a top-down shooter which is controlled mainly by a player's two thumbs on a touchscreen (the game will also work with a keyboard-mouse control interface). The right thumb fires weapons while the left thumb controls movement; the UI also lets players fire grenade, switch weapons and more.

The two missions we played were typical Halo situations. You control a Spartan warrior who is out to kill some nasty Covenant forces on alien planets. Fans of the previous Halo first person shooter games will see and play a lot that is familiar here, from only being able to hold two weapons in your inventory to having your armor regenerate and more.

For the most part, we found playing Halo: Spartan Assault to be very easy. Even with the touchscreen UI, it was a snap to just pick up the Surface and start firing at Covenant aliens, while also constantly moving. There are also opportunities to enter vehicles and pilot them in the game, such as on one mission where we entered a  Covenant tank to take out some anti-air turrets.

Visually, the game looks pretty slick and retains the art style of all the previous Halo titles. If we have one complaint, its that the AI of the enemies in the game need some work as they were too easy to shoot and take out. The Halo FPS series is well known for smart AI aliens and it was a shame that didn't translate to this new game.

Overall, playing this early build of Halo: Spartan Assault was a lot of fun and if the development teams make the AI more challenging they could have a highly popular game for Windows 8 and Windows Phone 8 owners. The game is due to launch sometime in July.