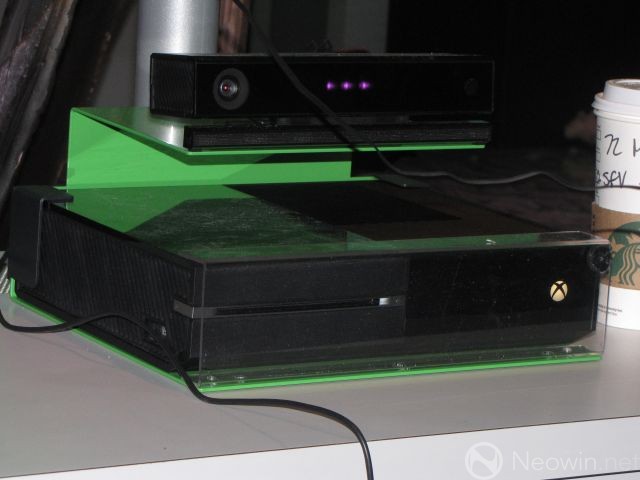 Microsoft wants the world to know that the upcoming Xbox One console is a powerful piece of hardware that can do things the current Xbox 360 console could never do. At a behind closed doors session at E3 2013 on Tuesday, we joined with some other journalists to see three hardware demos for the Xbox One that are not being shown to the general public.

The first demo showcased the Xbox One's cloud features as well as its overall hardware specs. A programmer at Microsoft took data from NASA to create an accurate view of the solar system that was running on the Xbox One. At one point, the demo focuses on the asteroid belt between Mars and Jupiter, where it tracked the orbital paths of 30,000 asteroids. The Microsoft reps said that simply would not be possible with the current Xbox 360 hardware.

Then the demo flipped a switch and added 300,000 more asteroid orbital paths. These were created because the Xbox One tapped into a cloud server where that kind of data can be off loaded but still shown on the console. Microsoft is making the pitch that putting in game features such as enemy AI and large open worlds on a cloud server will increase the power that game developers can access with the Xbox One. Of course, the trade off is that games that use the cloud have to be connected to the Internet, even in single player mode.

The second Xbox One demo showed off the Kinect motion gesture hardware features. It consistence of a first person shooter, Reflex, that will never actually be released to the public. This Tron-like game has the player shooting at hovering objects that attack with lasers. The first part of the Reflex demo showed how a player can simply move his controller up for a shield to pop up to block the shots, thanks to the Kinect hardware.

Another part of the demo had the player lean to the left or the right to avoid being shot at. Finally, the third demo showed the player pointing up at some airborne enemies and then speaking the worlds "Fire missiles" to unload a rocket attack on the robots. The Reflex Kinect demo shows that game developers have some new tools to use for the Xbox One to make Kinect games that will appeal to the hardcore shooter crowd in addition to the casual player.

Finally, the third demo showed how the TV aspect of Xbox One will work by watching a simulated NFL game and then switching to watching Game of Thrones while also keeping up with football scores on a snap view to the right side of the TV screen.

There was a brief Q&A after the demos but unfortunately, the Microsoft reps dodged some of the questions made by the press. For example, we asked if the 300,000 online servers that Microsoft said will be used for the Xbox One were all physical servers or if some of them were virtual machines. The rep said the company was not revealing that information yet.

While there is certainly some impressive hardware and technology inside the Xbox One, it remains to be seen if consumers will jump in to get the console because of its need for an Internet connection to play games combined with its restrictive used game disc policies. However, the promise of cloud computing and the new Kinect hardware will no doubt offer game developers some new options should they choose to use them.