Technically, the oldest Internet Explorer version that is still officially supported by Microsoft is IE6. It can still be run on Windows XP SP 3 and, as we have reported a lot lately, Microsoft will shut down support for that 12 year old OS in just over a month from now.

Most web sites have moved forward since that time with lots of new features and code that are used by more modern browsers. But could these sites also be viewed in some way by older browsers that are no longer supported? That was the question posed by programmer Antoni Sawicki, also known as "Tenox", who says he spends a lot of time working on older operating systems, 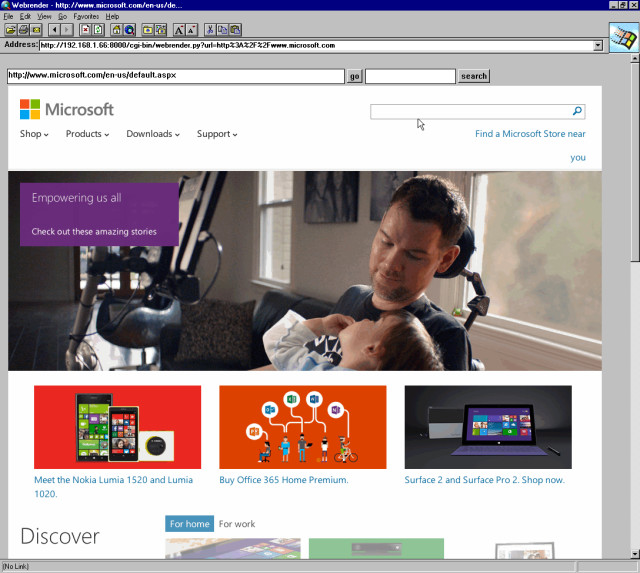 In a post on the Fun with Virtualization blog, he states that trying to bring up modern sites on older browsers "just doesn't work" thanks to the fact that those sites are based on more recent standards. However, Sawicki came up with this idea: "If you could render a web page on a proxy server to a simplified HTML, say 3.x. This would make a lot of web browsers happy."

He decided to use a program that created an screenshot of an entire web page, combined with an image map that has clickable sections based on the links of the original page. Then he created an app called Webrender.py to tie everything together. He states:

It’s a cgi-bin application that resides on a machine in the middle. It renders a gif image and spits out to the browser together with a simple web page, containing a URL and search input boxes plus the gif and image map.

The final result? Modern sites can be viewed on older browsers via the app, such as Microsoft.com on IE 1.5 as shown above. Sawicki added that Reddit was "surprisingly snappy with IE 1.5". There are still some drawbacks, such as the fact that the script only runs on Mac OS X, but he is "rewriting the script to work as a fully fledged HTTP proxy server instead of a cgi-bin application."

If you are thinking, why not simply do this with the browser agent, well, IE11 only supports agents back to IE6. So, if you want to use IE 1.5, you can do so with the method described above.

Source: Fun With Virtualization via Reddit | Image via Tenox