On Feb. 4, 2004, Mark Zuckerberg launched "The Facebook" from his college dorm room at Harvard University. It was designed to help students at the college find out information about each other with user-created profiles. 10 years later, Facebook has expanded well beyond that room and emerged as the single largest social networking service of all time.

Today, Facebook celebrated its 10th birthday with a video that doesn't focus on the site's founder or history. Rather, it is a montage of birthday parties held by ordinary 10-year-old kids from around the world. It's possible that Facebook wanted to show that, even though it is a huge publicly traded company, it is still young and has a lot of potential to grow and mature. 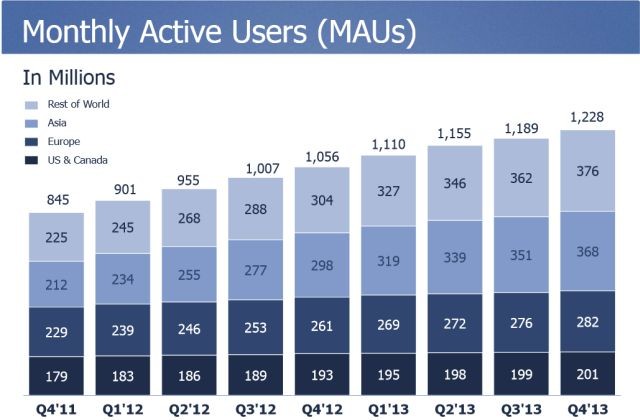 It certainly has expanded outside Harvard University in terms of users. In July 2009, nearly five years ago, Facebook announced it had 250 million users. In its latest quarterly financial report, Facebook said it now has 1.228 billion active monthly users worldwide and 757 million users that check on the service every day.

While Facebook got its start first as a web browser experience, more and more users are now connected via mobile apps such as the one that was recently launched for the Modern UI of Windows 8.1. About 945 million users connect to Facebook via mobile apps, and the company said that 296 million of them connect via those apps exclusively, bypassing the web browser version.

Along the way, Facebook has added features such as allowing users to upload pictures, putting in "Like" buttons for posts, and lots more. The rise of Facebook was certainly the cause for the fall of MySpace, which launched and achieved great success before Facebook started but quickly lost users to its competition just a few years later.

While Facebook has shown growth in overall users every single quarter, the company is also trying to branch out in other areas. It has bought a number of mobile apps over the past few years, including the photo-sharing app Instagram for $1 billion in 2012, which continues its own growth story at 150 million users and counting. More recently, Facebook launched a Flipboard-like news reader app called Paper.

And Zuckerberg? He's still the CEO of Facebook and will celebrate his 30th birthday in May. His estimated net worth is currently around $19 billion.