A few weeks ago, we discovered that Amazon was taking pre-orders for a previously unannounced Microsoft Windows Gift Card, with a launch date of October 18th, which is also when Windows 8.1 launches. Now a leak of what looks like a sales slide meant to help stores sell the card has been leaked, which includes the first tiny image of what the card itself looks like.

The slide was posted up on the Nawzil Twitter account, and describes how the gift card can be used to purchase apps, video and music from the Windows Store, Windows Phone Store and the Xbox Stores.  A couple of weeks ago, Microsoft activated the gift card code option for purchasing items in Windows 8.

The slide said that the gift cards will be made available in $10, $25 and $50 versions. Here's an extreme, if blurry, close up of the slide that shows the design of the Microsoft Windows Gift Card 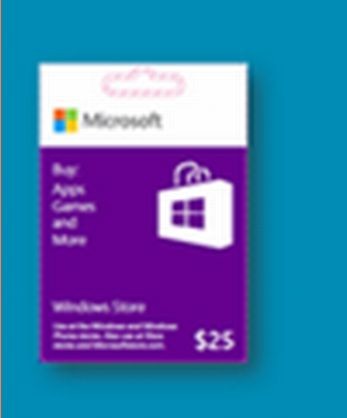 So far, Microsoft has not officially announced any plans to launch these new gift cards, even though Neowin has sent emails to the company's PR contacts asking for more information. Hopefully we will learn more about the cards, including which retailers will sell them, in the near future.