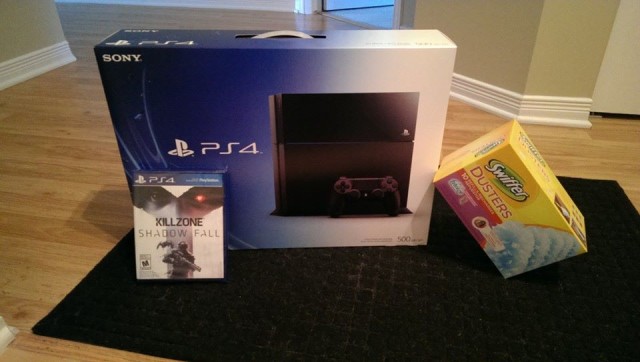 The launch of Sony's PlayStation 4 in the U.S. on Friday has not been without its problems, but that has not stopped a number of Neowin community members from getting the next-generation game console during launch week. Many of them posted up their quick hands-on impressions of the PS4 in our forums.

In a thread named, "Did anyone on Neowin actually get a PS4 today?" community member "RageofFury" posted up an image of his new PS4 retail box, along with some quick impressions:

So far, so good! I'm very happy with my purchase. The PS4 is well built, quiet and small. The interface is an improvement over the PS3, but could use additional tweaking. It is very fast and snappy which I like. I also like the redesigned PlayStation Store. Well done Sony! Killzone is a great game. Reminds me of Halo...somewhat. Beautiful graphics. The only issue I've encountered thus far is a message keeps appearing saying PSN is down for maintenance. I guess it was to be expected that PSN would crash with the sudden rush of PS4s connecting to it and accessing it.

Another community member, "AJerman" didn't seem as impressed. Here are some of his thoughts on the console's new DualShock 4 controller:

The PS4 controller is much better, but the stick layout is stil (sic) massively inferior to the Xbox controler (sic) (as expected for someone who prefers/is used to Xbox). As much as people raved about the DS4, I expected it to be something amazing. Compared to previous DS controllers, it's an evolution and definitely more ergonomic, but it's still the same DS controller you've grown to either love or hate, depending on your preference.

AJerman and other Neowin readers on the thread also complained about not being able to sign into the PlayStation Network or Store for hours after the launch.

"trooper11" started his own thread on the forums with some of his lengthy PS4 impressions. It's definitely worth reading the whole thing if you are interested in getting the console, but here's his very quick conclusion:

Great system really. It has its issues, but most of the issues I have are in software, things that can improve over time. I'm happy with the hardware so far. It seems to be built well and the DS4 is a standout. We all know its has the grunt to support some great games. Once I actually get more of the games I want, I'll be much happier. What I do know is that the games will come, its just a matter of when.

From what we can tell, the PS4 seems to be a solid game system, but many Neowin readers feel the software, at least for the launch, is somewhat lacking. it will be interesting to see if that's also the case for Microsoft's Xbox One when it launches on Friday.