Samsung this week officially commenced the countdown to “the next Galaxy”, shortly before disappointing us all with nothing more than a couple of video teasers for its new high-end Android handset. But the company also contacted media outlets last week, offering an invitation to “come and meet the next Galaxy” on 3 May, while a leak just a few days ago appeared to show a working prototype of the new handset, albeit in disguise.

But while there have been any number of rumours and reports hinting about the device in recent weeks and months, there’s still relatively little concrete info about it. Now, SlashGear claims to have some got its hands on data from the AnTuTu benchmarking app, which confirm key specs of the new handset. 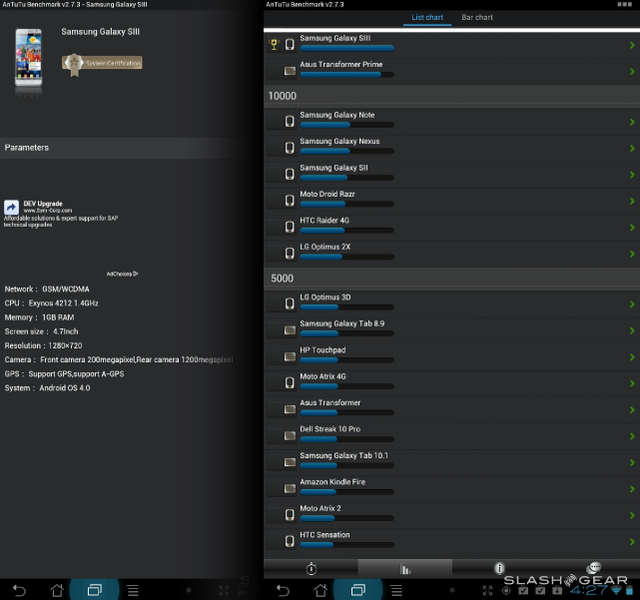 Frankly, there are few surprises in the spec list (left pane, above). Android 4.0 Ice Cream Sandwich is running the show, and the 1.4GHz processor won't be raising many eyebrows. While it does contradict some earlier wild reports that claimed 2GB of RAM and a 2GHz quad-core processor would be under the hood, the new Galaxy will make do with a gig of RAM and a dual-core Exynos 4212 CPU, a step up from the Exynos 4210 found in the Galaxy S II.

The 4.7” display is also as expected, as is its HD resolution (1280x720px). There’ll be a 2MP front-facing camera, while around the back, there’s an impressive-sounding 12MP shooter. Of course, megapixels aren’t everything, so we’ll have to wait and see it in action before we get too excited.

On the subject of performance though, the Galaxy S III apparently spanked the other devices that were benchmarked (right pane, above), including Samsung’s own Galaxy Nexus and Galaxy Note, and rival devices such as Motorola's Droid RAZR and the Asus Transformer Prime tablet, with its quad-core Tegra 3 processor.

We’ll find out everything we need to know about the Galaxy S III next week, but between now and then, there’s plenty more opportunity for speculation, discussion and general banter about what looks set to be another strong addition to Samsung’s Android handset line-up. Are you excited about the S III? Are you thinking of buying one, or would you rather hold out for a new iPhone, a Windows Phone 8 device, or even an Android 5.0 handset? Tell us what you think below!


Update: Well, it looks like at least one aspect of SlashGear's report wasn't quite accurate. As The Verge picked up, Samsung has revealed (via Korea NewsWire) that the 1.4GHz processor in its new handset will be a QUAD-core Exynos 4, not an Exynos 4 Dual. Since there isn't a quad-core Exynos 4212 (the quad-core version of the 4212 is the 4412), this appears to cast doubt on the veracity of claims that the benchmarks above are from the Galaxy S III.