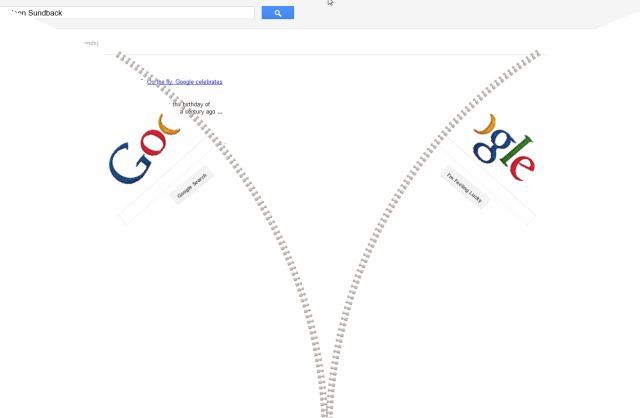 Google has come up with a lot of weird and wonderful ways to celebrate the birthday of various notable people in history via some clever custom Google logo designs and animations. Today, the newest Google logo is one of their most inventive. When you visit the Google home page today you will see that the site has been cut in two with a big zipper running down the middle of the page.

When you move your mouse cursor up to the top of the page and click on the zipper, the entire page then "unzips" to reveal that today is the 132nd birthday of the zipper's creator Gideon Sundback.

Born on April 24, 1888 in Sweden, Sunback later emigrated to the United States in 1905. Sundback came up with the final design of the modern zipper, with two sides of interlocking teeth that are brought together and apart with a metal slider, in 1914. The actual patent for what was called the "Separable Fastener" was issued in 1917.

The name "zipper" was coined by the B.F. Goodrich Company, the famous tire maker, in 1924. The zipper was used mainly for opening and closing tobacco pouches and boots until the 1930s when it started being used in the fashion industry, including pants.