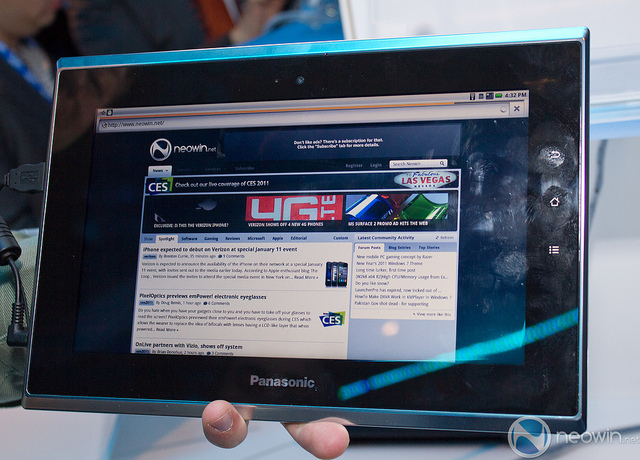 Panasonic is jumping on the tablet bandwagon, and has created several new Viera Tablets, revolving around its already successful IPTV Viera software. These tablets are Android based, come in 4, 7, and 10 inch models, and will be compatible with many Panasonic Viera TV's already on the market via a firmware upgrade. Future Panasonic TV's will of course support these tablets as well. For owners using Panasonic televisions that aren't compatible, new Blu-ray players created from the Viera line will support these tablets, allowing any consumer to access to Viera content and functinality. The 10 and 7 inch models have an HDMI out and USB port, while the 4 does not, and serves more of a remote control function than tablet.

These tablets offer the majority of features you'd find with an Android OS, including the Android Marketplace and Internet browser, but also feature an app store tailored to Viera specific applications including Netflix and Facebook. Time will tell whether or not developers will create Viera specific apps for Panasonic users. When asked if the Viera Market will tailored to an Open development model, answers were conflicting. During the press conference, it was hinted it may be, but reps on the floor said that information is not yet known. Stay tuned.

Performance of our hands on unit was somewhat laggy, but reps stated this unfinished product is continuing to be tested and fine tuned, and rest assured will be quite acceptable when it comes to performance.

One cool feature we tested was the ability to "flick" content over to a TV. You simply load a stream, or other various media source, push content on the tablets screen up, and it then appears on the TV. You can then multitask to another application without losing what you flicked to the television.

The 10 and 7 inch units felt solid, and had a nice weight to them. Not too heavy, but not flimsy either. The 4 inch model on the other hand was bulky, heavy, and felt more like a remote than a tablet.

All in all these lines of tablets shows promise, and with the integration of Viera, many Panasonic owners may jump at the chance to make their TV viewing experience more interactive.