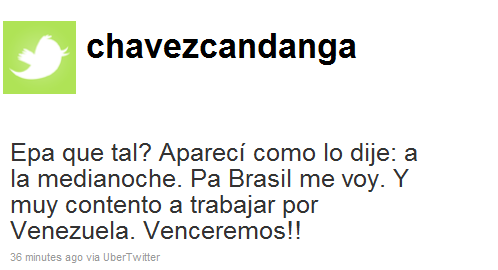 The tweet, that in English says, "Hey how's it going? I appeared like I said I would: at midnight. I'm off to Brazil. And very happy to work for Venezuela. We will be victorious!!" was posted on his account @chavezcandanga. Candanga translates to "devil" in some countries but it is known in Venezuela to mean someone who is strong-willed and rebellious or even a trouble-maker.

Venezuelans have flocked to the micro-blogging website and now have over 200,000 active accounts after an over 1,000% rise in usage in 2009. Chavez requires that all TV and radio stations run his speeches which often exceed seven hours.

Venezuela's opposition have found social networking websites like Twitter to be beneficial as they are easily and instantly accessible and have no government oversight. The influence of these websites is becoming increasingly apparent after he has been forced to start a "media war" and ordered his supporters to use websites like Twitter and Facebook.

Since his account was created he has gained over 28,500 followers. Chavez reportedly told members of his cabinet to look at the website for his updates laughing, "I'll be breaking loose there ... Keep an eye out".

Chavez is renowned for his hours-long speeches and he may feel restricted by Twitter's 140-character limit.