A new study from IDG Connect has some rather troubling information for Microsoft. The study takes a look at how professionals are using iPads at work, how happy they are with the device, and whether or not they would consider swapping it for something else.

Some analysts have already said that tablets running Microsoft's Windows 8 tablet will probably appeal more to enterprise markets than to the wider public, so they've definitely got plenty of reasons to be concerned about how Apple's iPad is faring with professionals.

The good news for Microsoft in the report is that not too many businesses in North America and Asia are buying iPads for their employees (13% and 10% in NA and Asia, vs 40% and 47% in Africa, respectively). The bad news is that the professionals who do have iPads, whether company supplied or brought from home, aren't very interested in switching to something else anytime in the near future, even though they admit that it does have limited functionality.

The iPad had completely replaced laptops for some of the people surveyed, but the majority said that they weren't giving up their PCs or laptops any time soon, about 16% of them said that they were using their other devices less. Interestingly, this was particularly true for the Middle East (70%) and Asia (63%). What makes iPads more appealing to people in those areas than in the rest of the world? 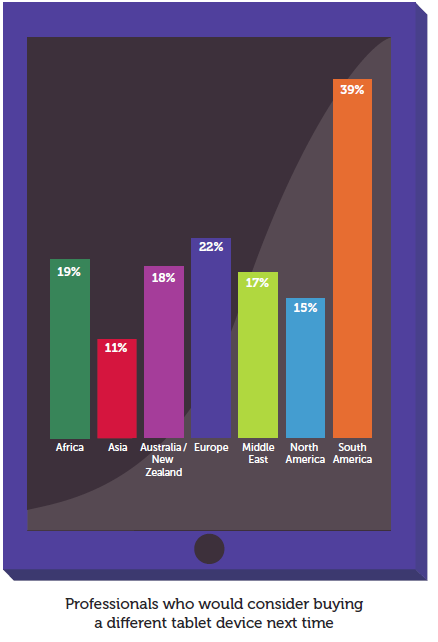 Here's where the bad news for Microsoft comes in. Out of everyone who was surveyed, only 17% said that they would even consider replacing their iPad with anything else. Although most of the people who use their iPad at work bought it themselves, they knew what they were getting into: only 13% said that they bought the device just because they had heard or read good things about it.

As mentioned earlier, there are way more businesses in Europe and Africa who are buying iPads for their employees than in North America and Asia. For Microsoft, this could be the silver lining. Right now, the number of businesses who have officially adopted tablet computing is relatively small, and Microsoft still has a good chance of jumping into the market. This all depends, of course, on whether or not those businesses decide to adopt tablets at all.

And since most people haven't gotten a chance to see and use Windows 8 yet, Microsoft still has plenty of chances to convince people – and this includes businesses and consumers – that they offer a better product. This will probably be a lot easier with businesses, who are used to using Microsoft products more than Apple's, than it will be with consumers, who haven't yet really been convinced to give anything else a second look.