Intel officially announced its new PC data transfer technology, Thunderbolt, in 2011, with support for bi-directional data transfer speeds of up to 10 Gbps. Thunderbolt ports first started appearing on some of Apple's MacBook Pro notebooks later in 2011 but it was not until 2012 when the first Windows-based PCs started adding those ports to their products. However, so far only a few Windows PCs have added Thunderbolt ports, with PC OEMs preferring USB 3.0. 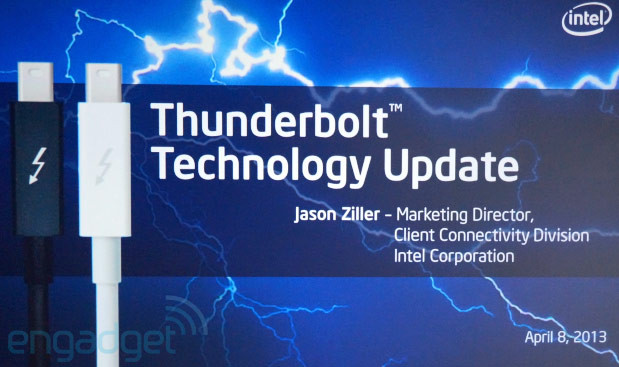 Today, Engadget reports that Intel revealed the next generation of Thunderbolt as part of their presentation to the National Association of Broadcasters. The next version will offer bi-directional data transfer speeds that should be double that of the current Thunderbolt ports, up to 20 Gbps. However, Thunderbolt 2.0 products will still work with the current ports, just not at their optimal speeds.

Intel also claims that the new Thunderbolt port will also allow for 4K video file transfers. Production of the port is expected to begin in mass quantities sometime in 2014. The big question: Will Thunderbolt 2.0 be used more by Windows PC OEMs compared to the current generation? It will still have to compete with USB 3.0, which will be getting its own "Super Speed" data transfer boost to 10 Gbps for products shipping later this year.