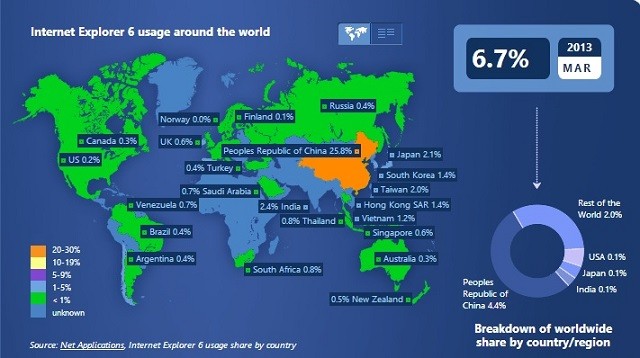 The countdown is well and truly underway until Internet Explorer 6 finally dies away into the oblivion of outdated web browsers. However there's one country whose slow progress at getting rid of the browser is holding back the rest of the world. Currently, China's local Internet Explorer 6 market share is sitting at a whopping 25.8%, by far the largest share in any country, and it's preventing the worldwide stats from hitting that magical 1% mark.

If you look outside China you'll find that basically every other country has their IE6 market share come in at under 2%, with a significant portion - including the United States, Canada, Australia and Russia - seeing their share drop below 0.5%. However the worldwide share is sticking at 6.7%, and that's because the huge segment of Chinese users that, for one reason or another, aren't adopting a more modern browser.

Internet Explorer 6, a browser that's now more than 10 years old, was bundled as a major part of Windows XP, an operating system that still has a huge presence in emerging markets such as China. Rampant and widespread software piracy of Microsoft's operating systems still keeps Windows XP as a major player in China, and with users unwilling to either update their browser or install a more modern operating system, IE6 will continue to thrive.

While efforts in many Western markets to rid the world of IE6 have been great (such as the low 0.2% share you'll find in the USA), it's time to finally kill off the browser in China, as it's simply not suitable for the modern internet that requires speed, standards, and security. Switching Chinese users onto a current browser remains a huge challenge for Microsoft, and it's unclear if there's a strategy that would actually work to kill the browser in the country.

If you happen to live in the nation, or anywhere else for that matter, ensure that you and your friends aren't using the outdated browser, and be sure to spread the word about the benefits of a modern browser.