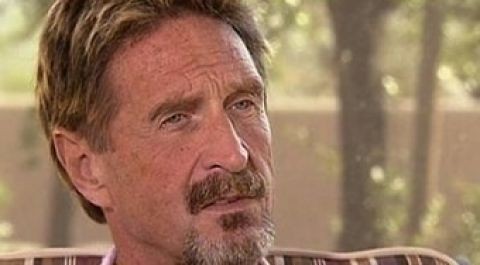 Is John McAfee, the founder of the McAfee antivirus company, the victim of a mass conspiracy, or is he just crazy? Apparently, McAfee is not crazy enough to want to stick around in Central America anymore.

Earlier this week, McAfee made his way to Guatemala from Belize, several weeks after the murder of American businessman Gregory Faull in that country. The government of Belize claims they merely want to question McAfee but he has maintained the belief that Belize law enforcement officials want to pin the murder of Faull on him.

Later in the week, the government of Guatemala arrested McAfee on charges of illegally entering their country. There is now an effort to pass him over back to Belize. In a new Reuters interview, McAfee sounds like he has had enough of living in that part of the world.

"I wish I could just pack my bags and go to Miami," he told Reuters. "I don't think I fully understood the political situation. I'm an embarrassment to the Guatemalan government and I'm jeopardizing their relationship with Belize."

Meanwhile, his official blog, WhoIsMcAfee, has been updated several times today with posts that claim to show the extent of the alleged corruption in Belize, although McAfee claims the updates aren't from him as he told Reuters today he no longer has access to the Internet. The posts that are now being made on his blog are written by a unknown group of friends based in Seattle.