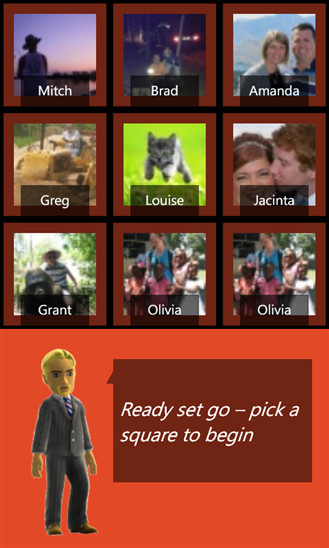 During our coverage of the 2012 BUILD conference, we reported on the event's hackathon. For about three days during the conference, small teams of talented programmers and designers created apps for Windows 8 and Windows Phone 8 in one of Microsoft's buildings in Redmond, Washington.

The team that won the $2,500 prize for best Windows Phone 8 app was the group behind Social Squares. This week, everyone who owns a Windows Phone 7 or 8 device can now download the final version of the winning app from the Windows Phone Store.

As we reported back in November, Social Squares is a game which allows its users to arrange nine of their Facebook friends in a 3x3 grid. Then the player is asked random questions about each person to gain points with three levels of difficulty.

The Windows Phone 8 version has two extra cool features. One uses the phone's accelerometer to let people shake the device. This in turn randomly generate nine new Facebook friends on the game's grid.  Social Squares also uses the NFC features in Windows Phone 8 so that when two phones touch, you can quickly compare Social Square games with another player.

It's cool that a game that was originally made in three days is now available to the general public. The full version of Social Squares is available for download now for 99 cents.