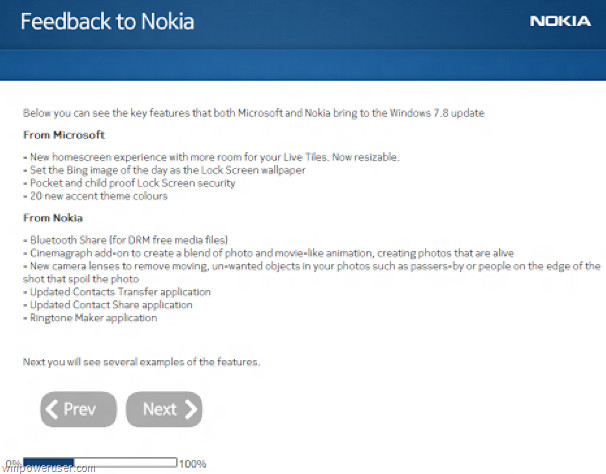 Now, a newly leaked image that reportedly comes from a Nokia online customer survey shows what Nokia Lumia owners can expect when Windows Phone 7.8 is released. The image, posted on WMPoweruser.com, confirms that it will include the new Start screen with resizable Live tiles, the new Bing wallpaper lock screen and more on Microsoft's end of the update.

The older Nokia Lumia phones will also get some new features that have previously been put into Nokia's new Windows Phone 8 products. They include Cinemagraph, which add limited animation to still photos, along with camera lenses where people can remove unwanted elements from a photo quickly.

Other new additions listed on the survey include sharing DRM-free media files via Bluetooth, a way to make ring tones and updated Contacts Transfer and Share apps. Again, these will be exclusive new additions for Nokia's Windows Phone 7.5 phones and will not be a part of Microsoft's overall 7.8 update that will be offered for devices made by other companies.