A new report from Chitika has been released and depending on which publication you read, they will either frame it as the demise of all things Microsoft or will provide a reasonable basis for why the numbers are below that of the iPad and Android.

In a nut shell, the Surface took .13% of the web traffic generated from the ad impressions across the Chitika network while Android took .91% of the market; Chitika states the sample base was in the tens of millions.

For those keeping score at home, both Microsoft and Google’s first part devices took about 1% of the market, combined. The iPad still easily dominates the tablet traffic market by taking 88% of the pie. The remaining web traffic would be made up of a mixture of third-party Android devices and all the other tablets that have been released over the years. 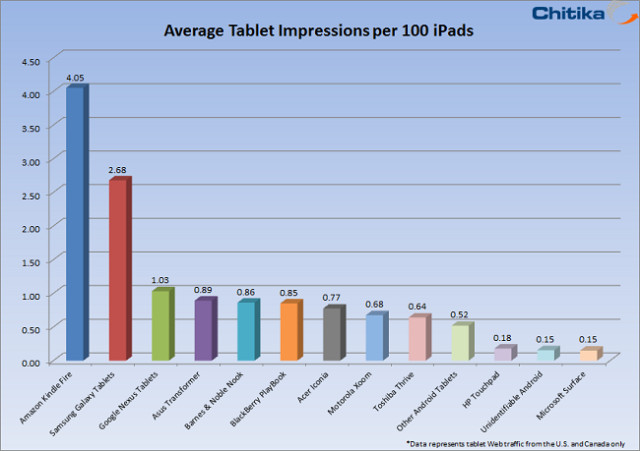 If you are shocked that the Surface, while only being on the market for about 6 weeks, does not command a massive portion of the market, you may need to reevaluate your expectations. Seeing that the Surface is taking only a small percentage is not surprising at this stage of the game but if we come back in a year from now and it’s still floating at less than 1%, then it may be time to sound the alarm. 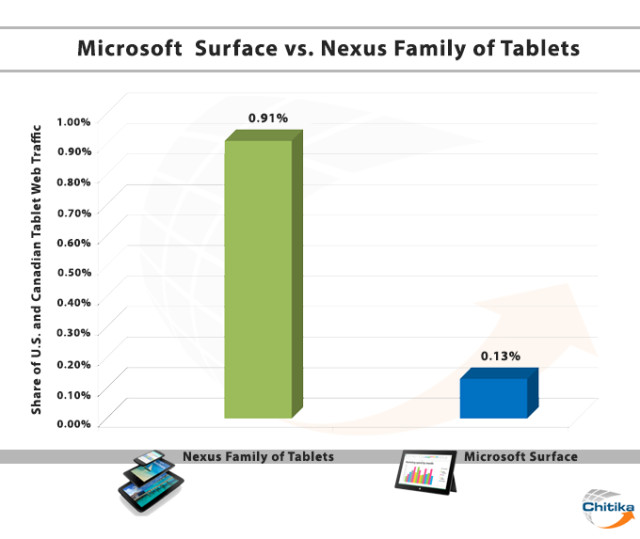 More surprising from the study is that Google, with its Nexus 7 and Nexus 10 tablets, is accounting for less than 1% of the market. It goes to show how strong the grasp of the iPad has on the tablet market and the considerable uphill battle Microsoft has against Apple in this segment.

For now, we will continue to watch these numbers closely but to forecast imminent death for the Surface based on these numbers is not only reckless, it’s unfounded.

Via: All Things D