The Moto Z is a handset that will most likely be looked over by many and for good reason. In the US, the handset was exclusive to Verizon for several months and has only recently become available for purchase as an unlocked device to be used on a GSM carrier. While this doesn’t exactly set up the Moto Z to be a breakout success in the US market, Lenovo's entry does give users another option if they aren't looking for a Samsung or LG. So how does this extremely handsome and svelte modular device stack up to the competition? Let's find out. 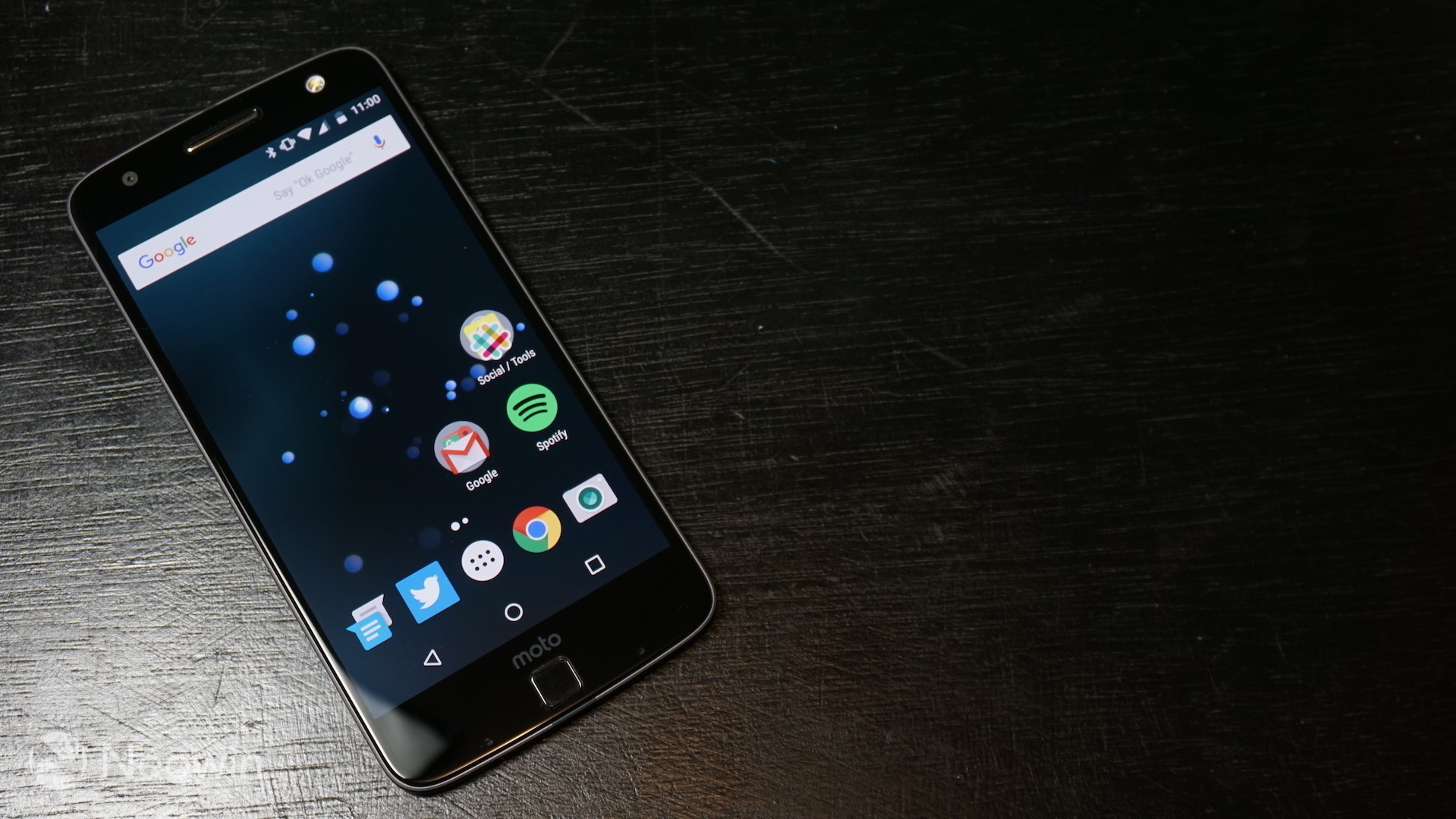 The Moto Z offers a distinctive look but isn't the most comfortable in the hand when it comes to day-to-day use. As noted in the first impressions article, the handset feels a bit wide, is extremely thin, and offers a solid, but welcome heft. Like most top-tier handsets, the Moto Z is constructed from metal and glass, but Lenovo highlights that the 'Z' utilizes military aircraft grade aluminum and stainless steel. Although it isn't waterproof, Lenovo does promote that the handset offers a "water repellent nano-coating". But this feature doesn't instill much confidence, considering that the company does not offer a proper rating on how much liquid exposure the handset can handle. 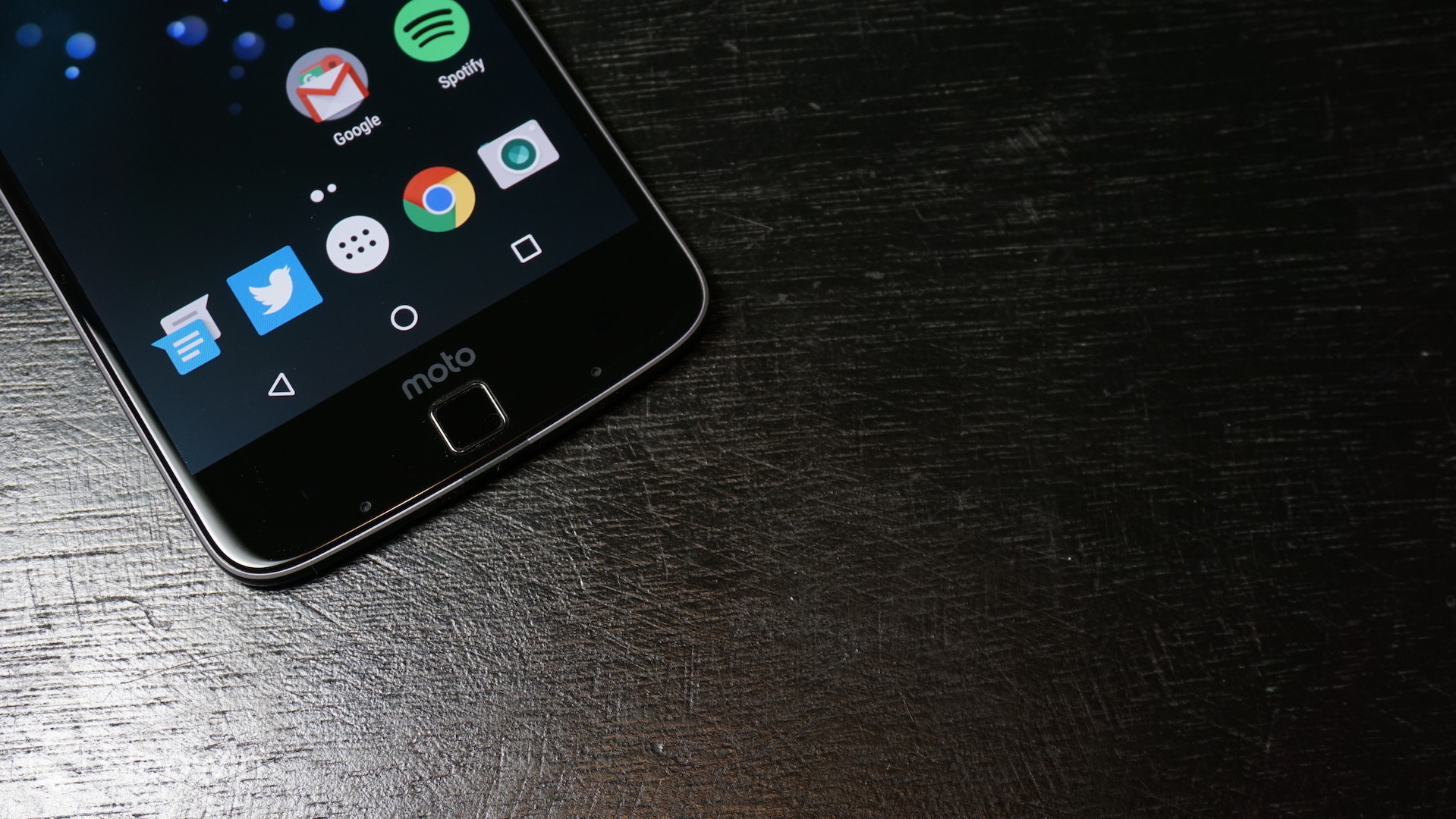 The front is dominated by the 5.5-inch QHD AMOLED display which looks crisp, offers excellent color reproduction, and great viewing angles. While I know that most displays suffer some degree of color loss under sunlight, the Moto Z has a strange reflective effect that makes it hard to see under direct sunlight. While not quite as bad as what I experienced with the LG G Flex, it is a bit odd to have this issue on such a high-priced unit. Luckily, the problem can be remedied by tilting the phone to a slightly different angle, but this is honestly something that shouldn't even occur. 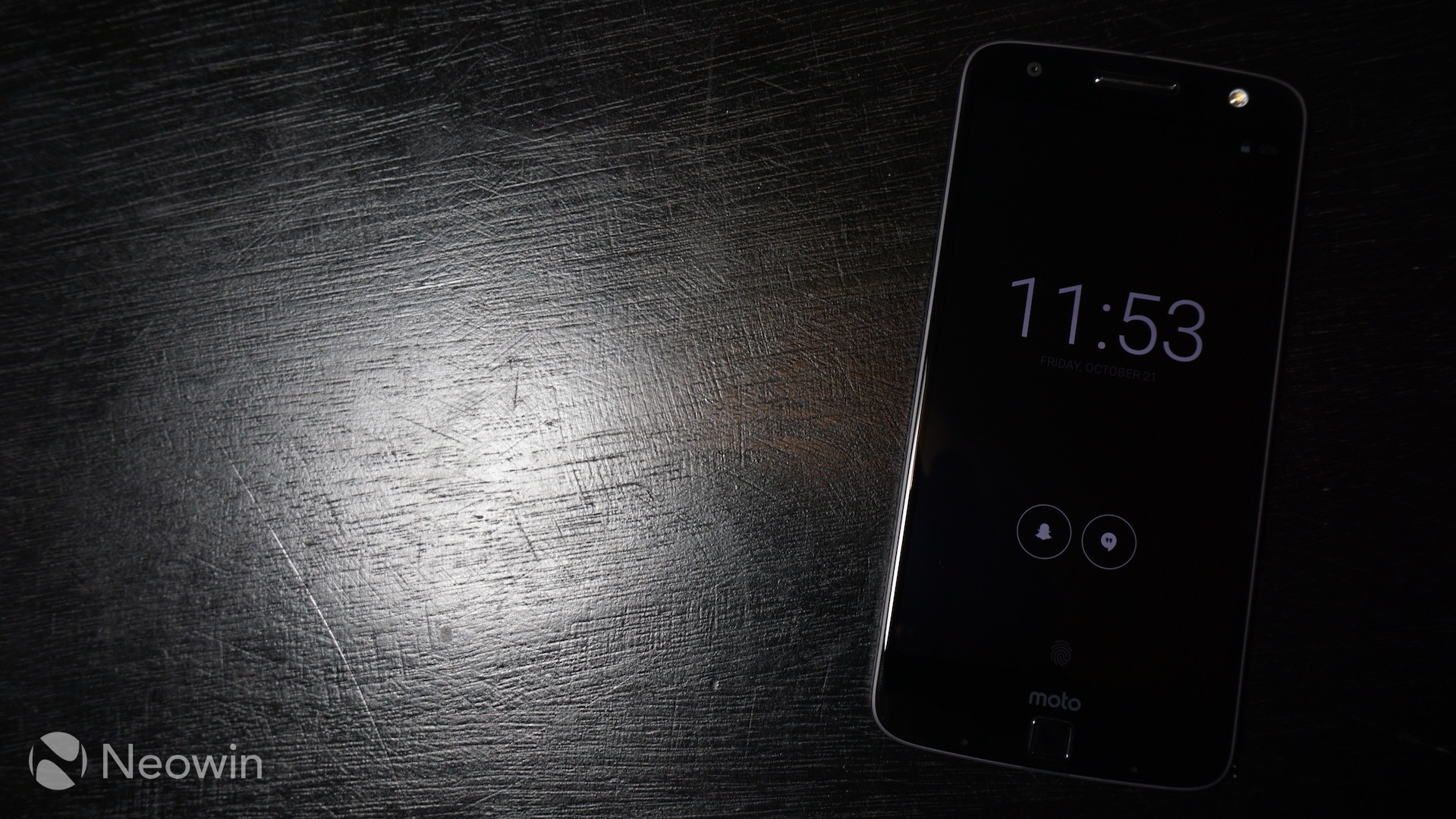 If there is one thing unique to the Moto Z display, it's the 'Moto Display' feature that offers simple notifications at a glance. Moto Display works by showing notification icons when a user approaches or waves at the handset. The feature is triggered by the proximity sensors, which can be seen above, offering a subtle glimpse of incoming notifications. While not as convenient as having an 'Always-On Display', it still works fairly well, is a very understated, and clever way of delivering notifications.

Although it wasn't a huge issue for me, I thought it would be important to mention that the Moto Z does not offer a 3.5mm headphone jack. Instead, you will be required to use the included USB Type-C to 3.5mm adapter, stream your content via Bluetooth, or blast it through the front firing speaker that also doubles as the phone's earpiece for calls. 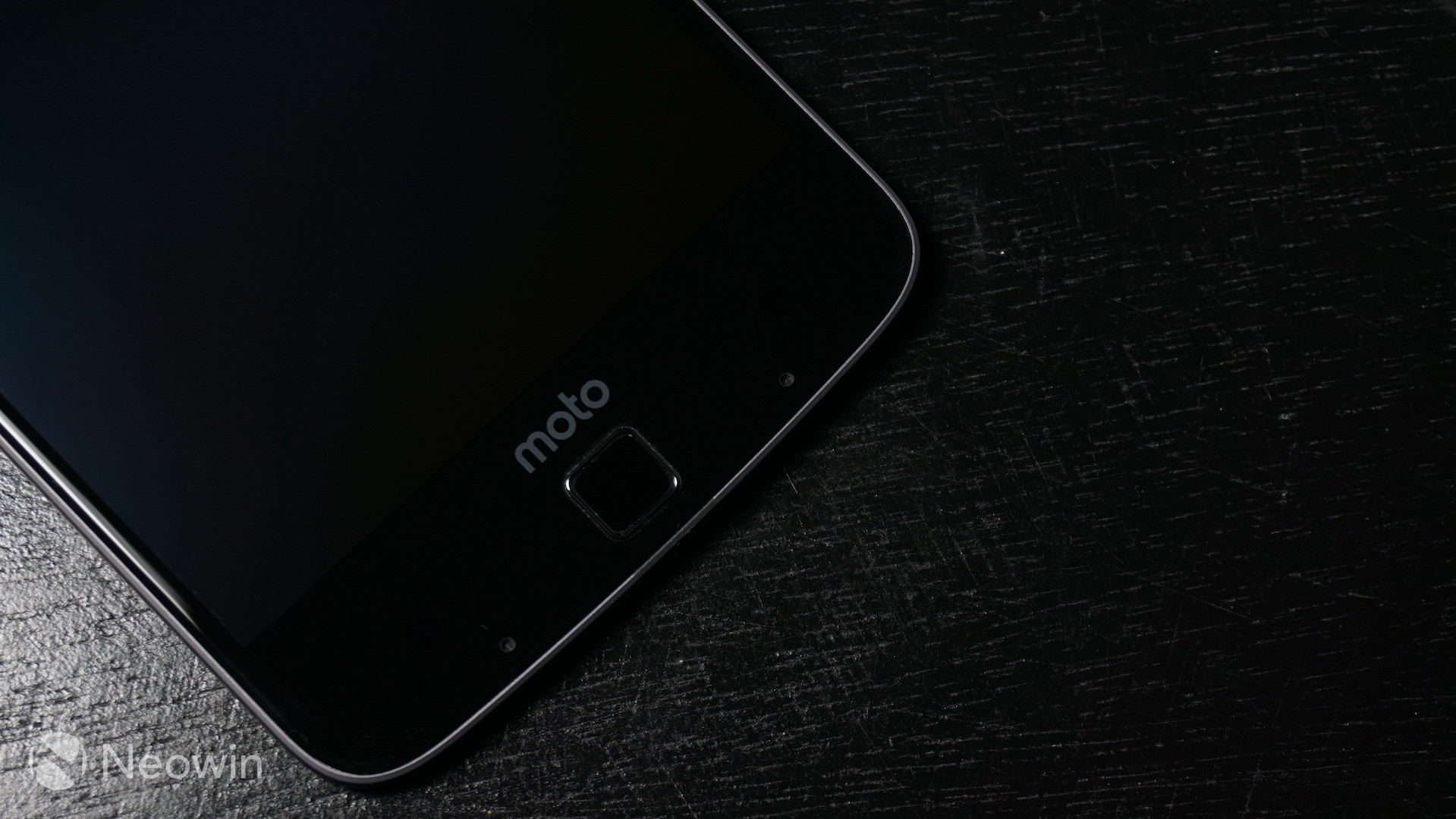 The fingerprint sensor for the Moto Z resides right below the display and frankly is a bit of an oddity. I don't have any qualms about the performance, even though it isn't the fastest, but the sensor would've made much more sense if it was a functional home button. But, all is not lost, as the sensor offers the capability to turn the screen off by firmly pressing on it. This is highly convenient, especially for someone that might be used to tapping the screen to have it turn on and off. 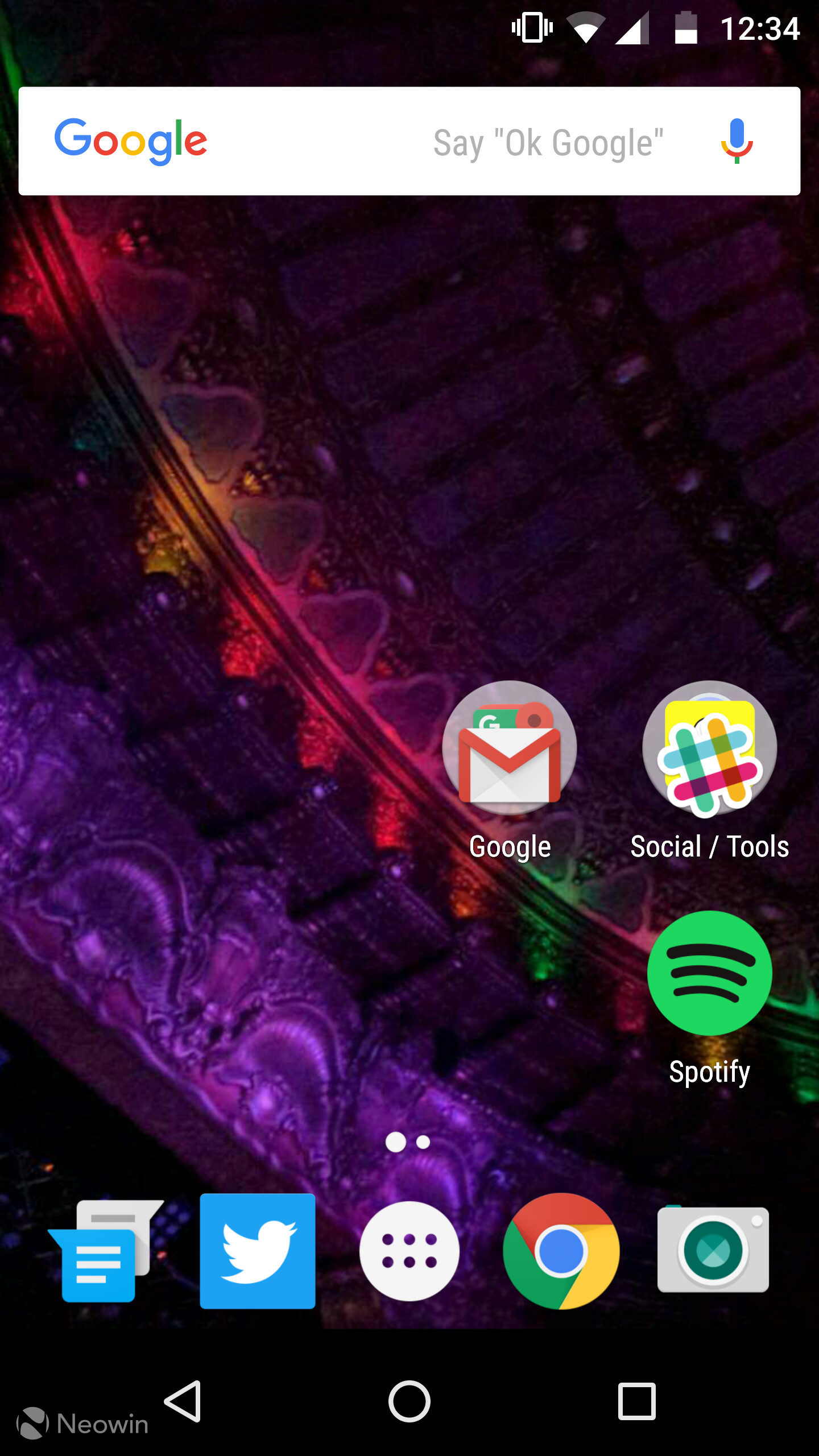 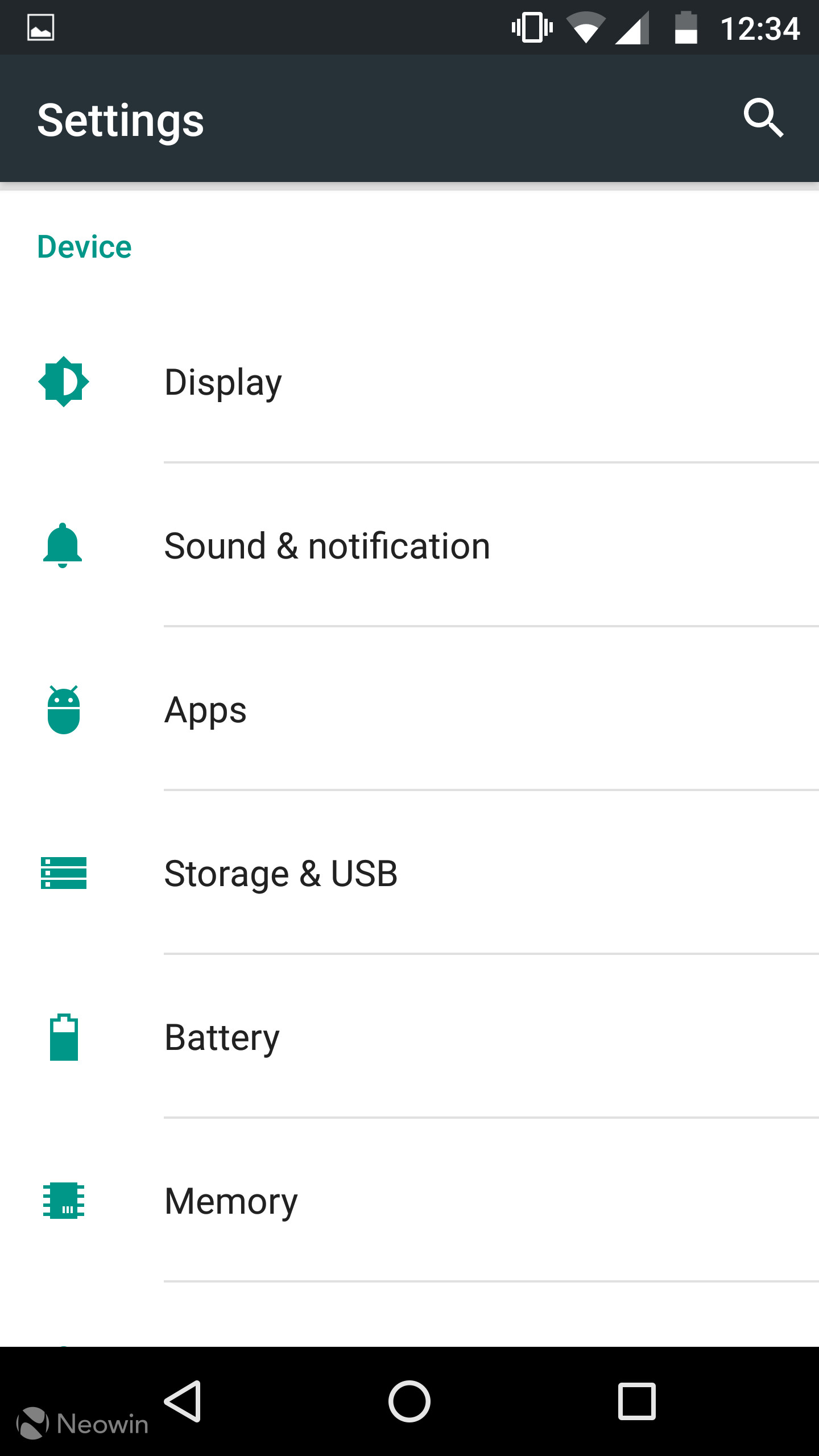 As far as software goes, the Z runs Android 6.0.1 with the Google Now Launcher. This means that you'll be getting a fairly stock Android experience without all the bloated features that most manufacturers tend to pack in. For the most part, things run extremely well, but there was an odd quirk, with apps consistently crashing throughout my few weeks of use. While some call this "the normal Android experience", in my day-to-day use with other Android handsets, I rarely encounter this issue. While not a huge pain, I hope this issue is remedied by a future update to the apps or with the Android 7.0 Nougat update. 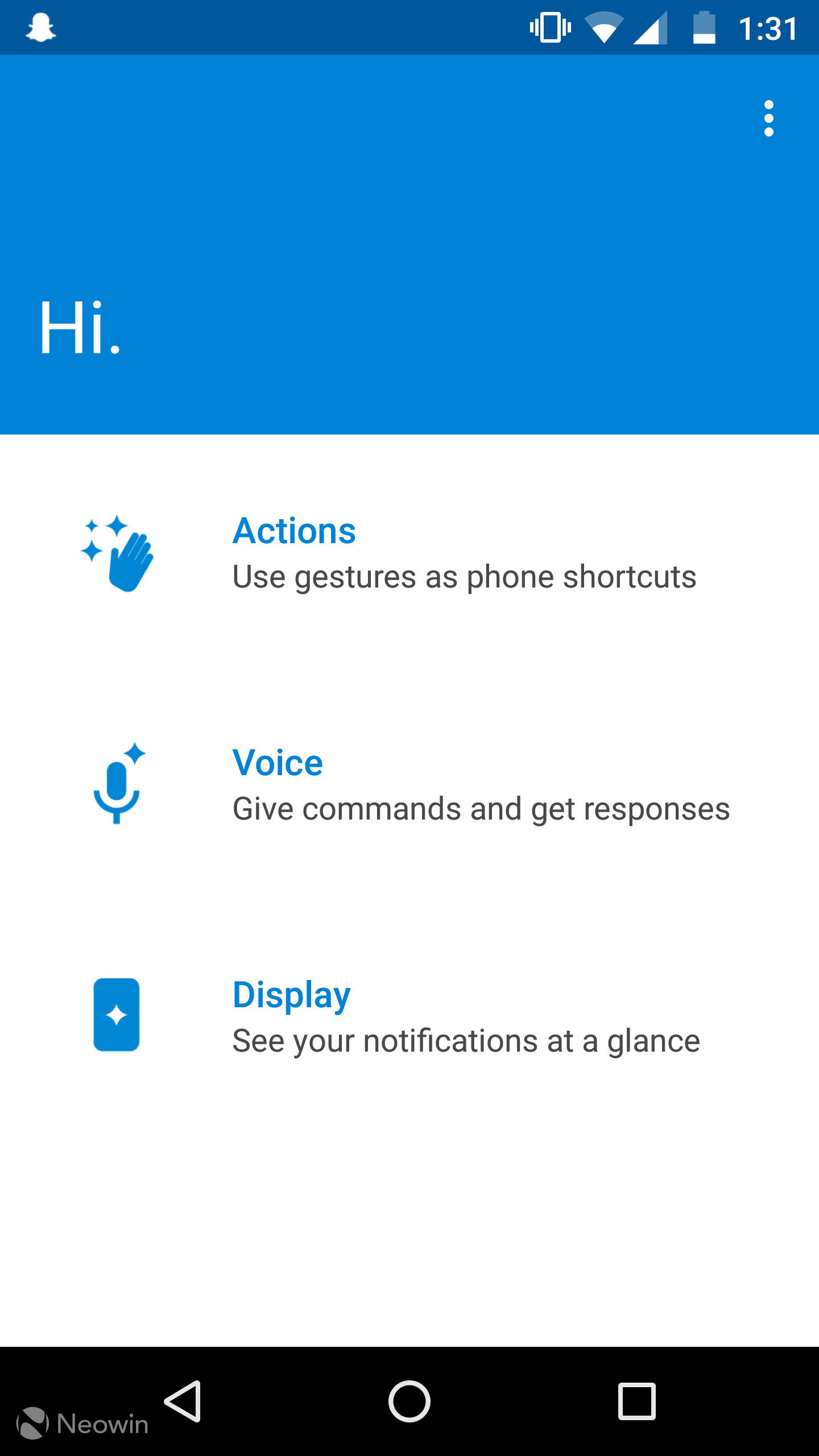 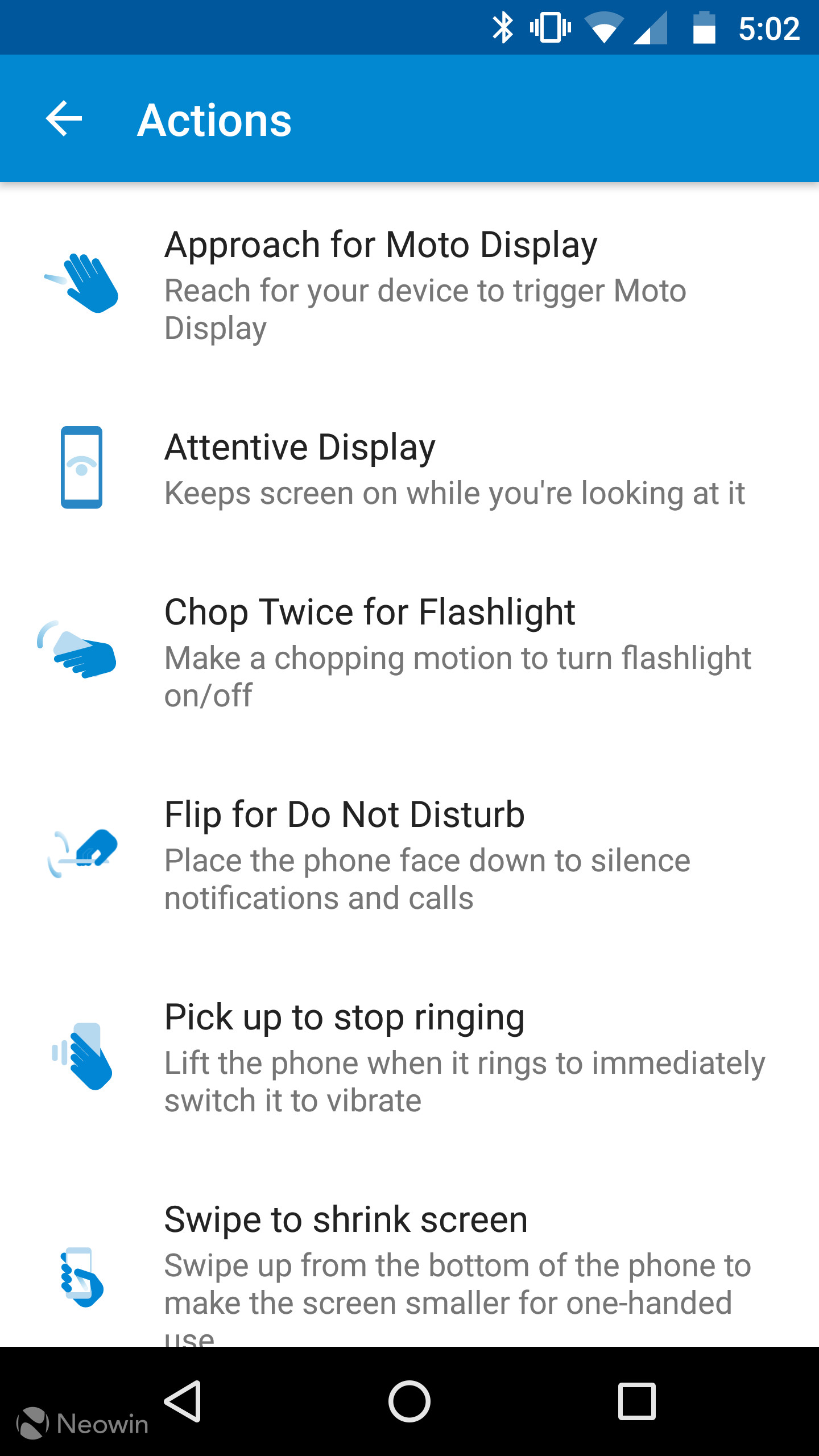 The Moto Z offers top-of-the-line specifications with its Qualcomm Snapdragon 820, 4GB RAM and other supporting features. When it comes to general use, the phone is snappy and never suffered a moment of lag. As mentioned previously, the majority of the OS is stock, but Lenovo has added its own ‘Moto’ app, offering expanded options for the display, voice controls, and gesture commands. While the features from the Moto app are not necessary, they do offer some incredibly useful tools that make for a better experience. 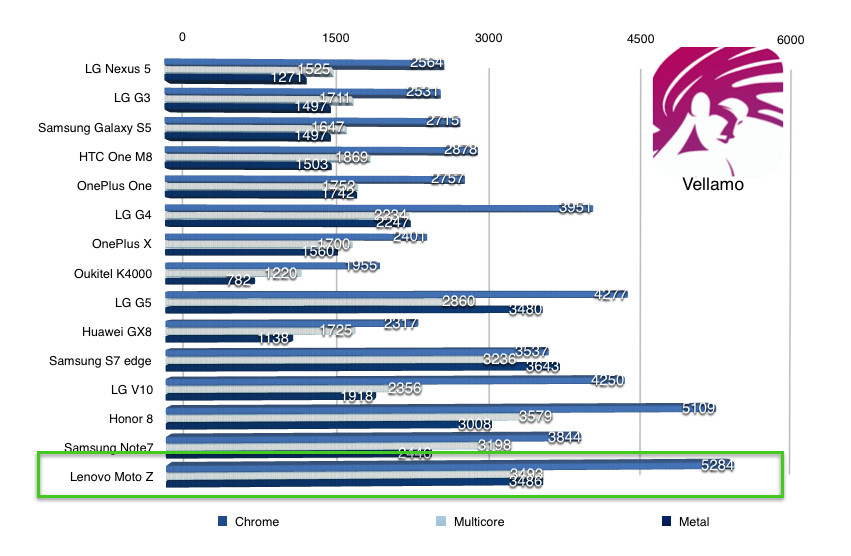 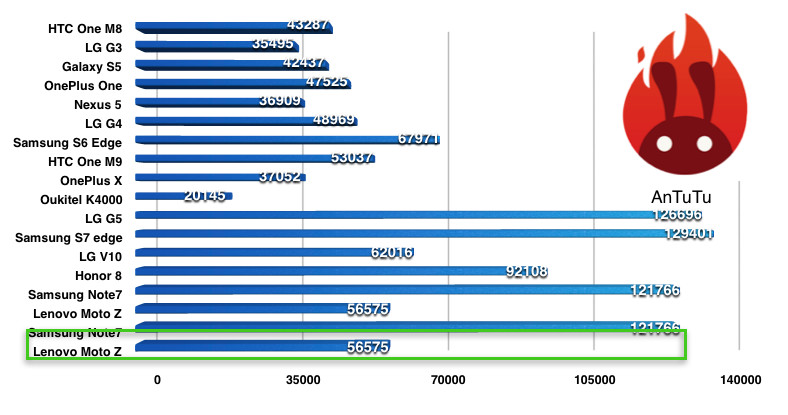 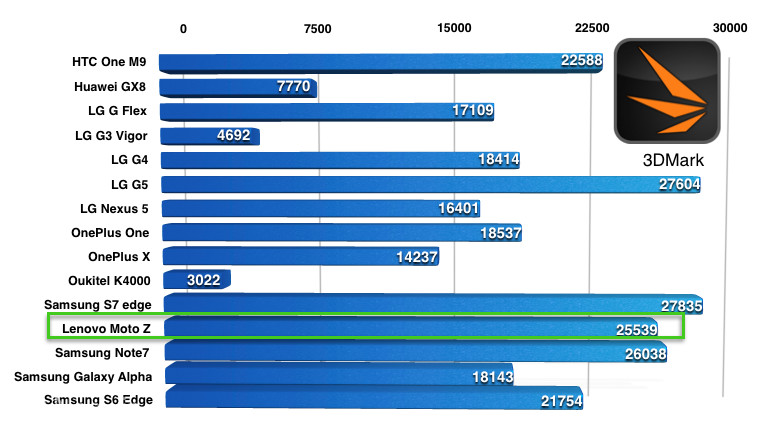 Per usual, the results from various benchmarking applications have been uploaded for those that like to see the numbers.

The Moto Z offers a 2600 mAh battery, which for most, will be just enough to get through a 12 hour day. For my day-to-day, I typically tend to heavily use Twitter, Spotify streaming through Bluetooth, Chrome, email, texting and Snapchat. Naturally, it will all depend on your use, but those that flirt with battery intensive apps will most likely want to keep the charger close. The Z comes equipped with a USB Type-C charging port and, although the handset is powered by a Qualcomm processor, it does not offer the standard Quick Charge option. Instead, fast charging will rely on Lenovo's proprietary TurboPower charging method, that will require the Lenovo-provided charger. Naturally, you can use any charger you want, you just will not be able to take advantage of fast charging. 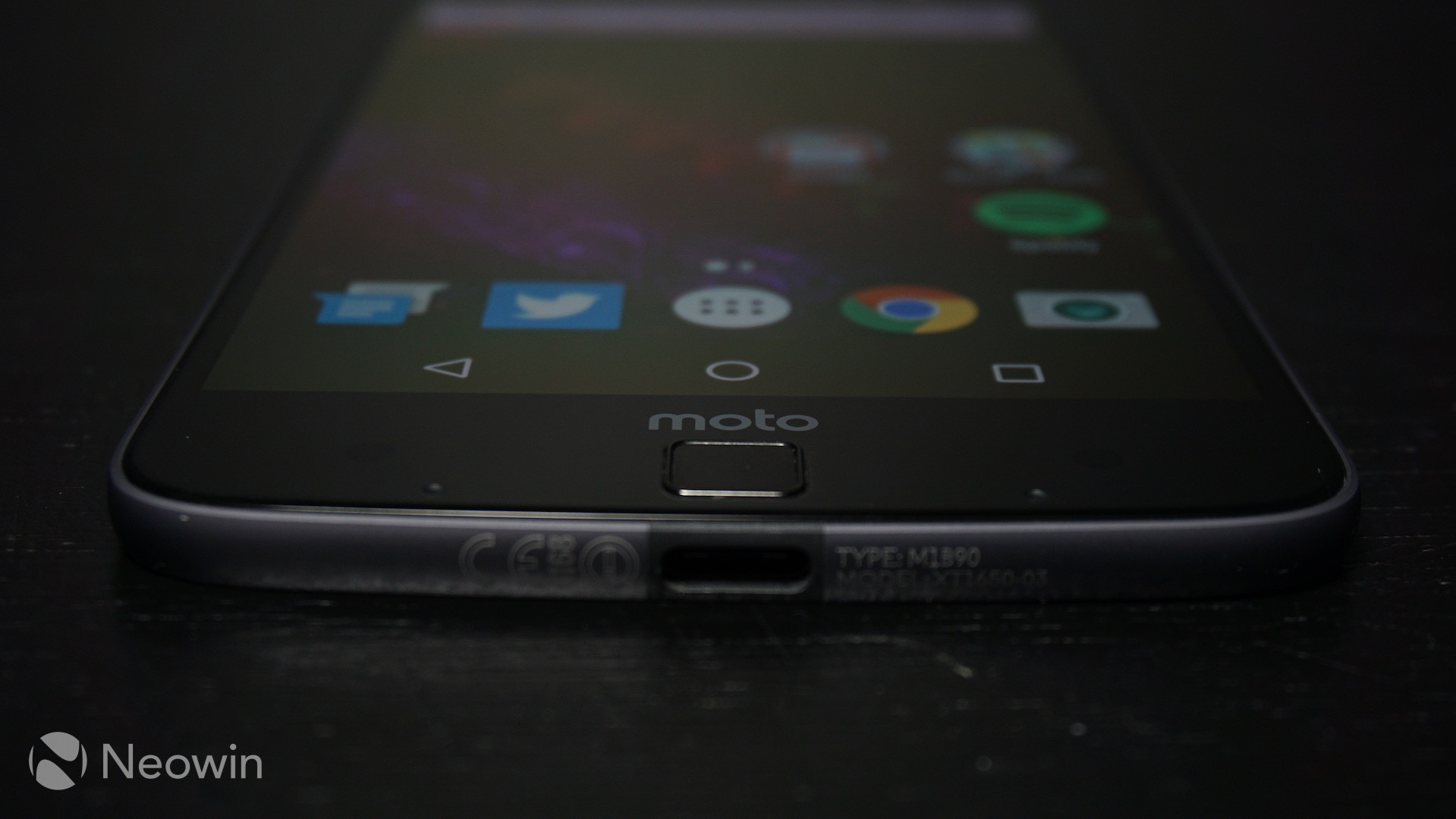 Like any Android device, the Moto Z has its good and bad days. On a good day, you'll be tucking into bed after a 16 hour day with around 10% battery remaining. On a bad one, you'll be charging up after seven hours wondering what the heck you did wrong. While I don't think it is impossible to get by with the Z comfortably on a daily basis, I do think there is a bit more anxiety involved when it comes to using it. Although there isn't a strict requirement on battery capacity, I think there is a slight expectation that a high-end unit in 2016 should offer at least 3000 mAh of battery, if not more. Sure, the Z is extremely svelte, but it comes at a great cost. It's as if Lenovo never received the memo that there is no longer a competition in creating the thinnest device, and now it's all about creating the best all-around device and minimizing the impact to the experience. 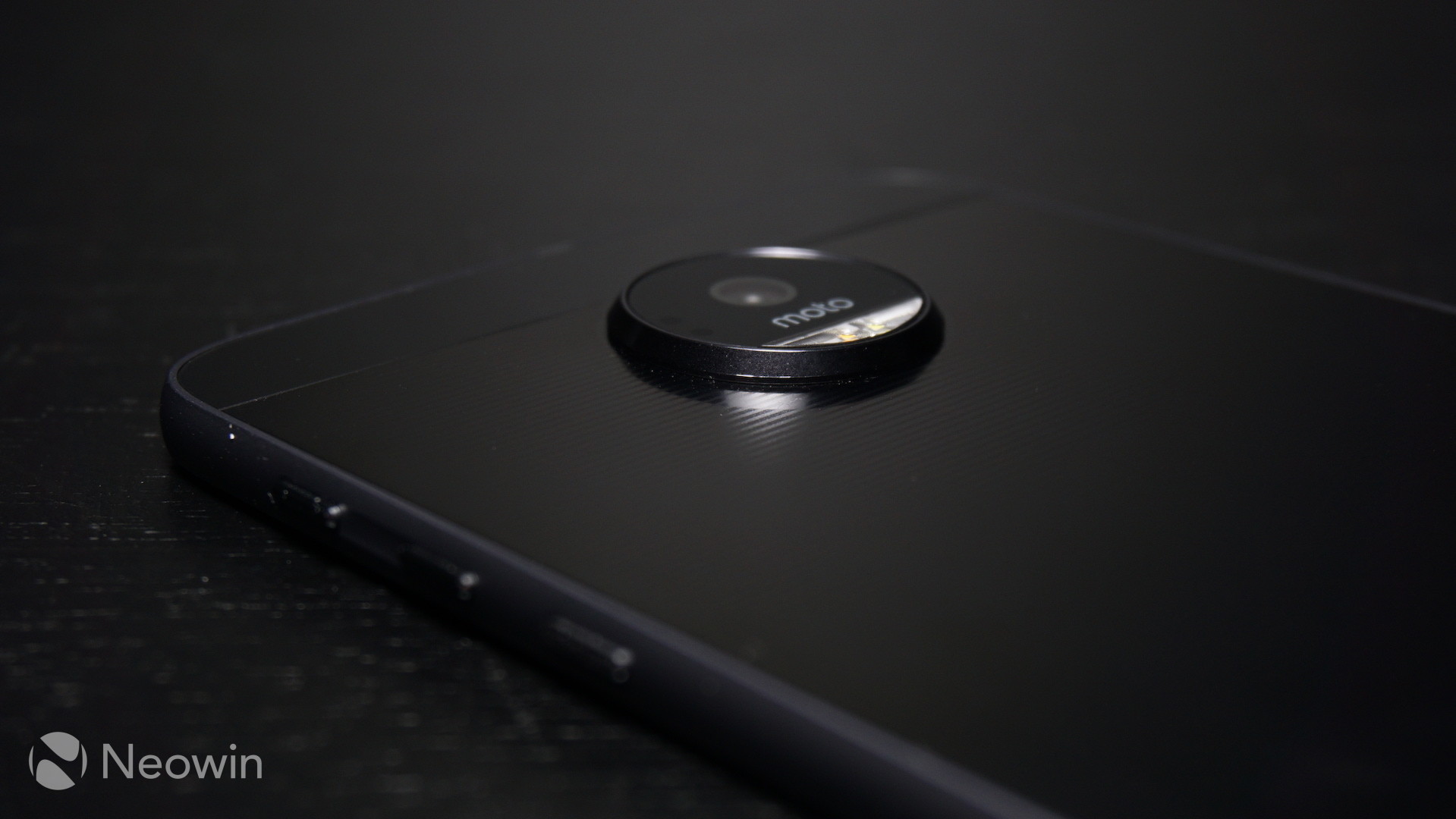 The Moto Z offers a 13MP camera with all of the bells and whistles like laser autofocus and optical image stabilization. On paper, this is the ideal setup and is a must if you are producing a top-tier handset in 2016. While the 13MP camera takes pretty good pictures and movies during the daytime or in well-lit areas, it absolutely struggles in low light or night time scenarios.

To be a bit clearer, the camera is actually pretty capable once you get into manual mode, but the algorithm for "night mode", which engages in low light, ruins any chance you might have of capturing the scene in a satisfactory manner. Luckily, this is something that can be fixed in a software update but, for the time being, the Moto Z is not a handset that will allow you to "shoot from the hip" at night.

As for video, the daytime results are good, but I did notice some stutter once or twice during my few weeks of shooting video. The Moto Z does fair a bit better when shooting night time videos, and although they are grainy, does allow you to capture the night scene in a more accurate manner. 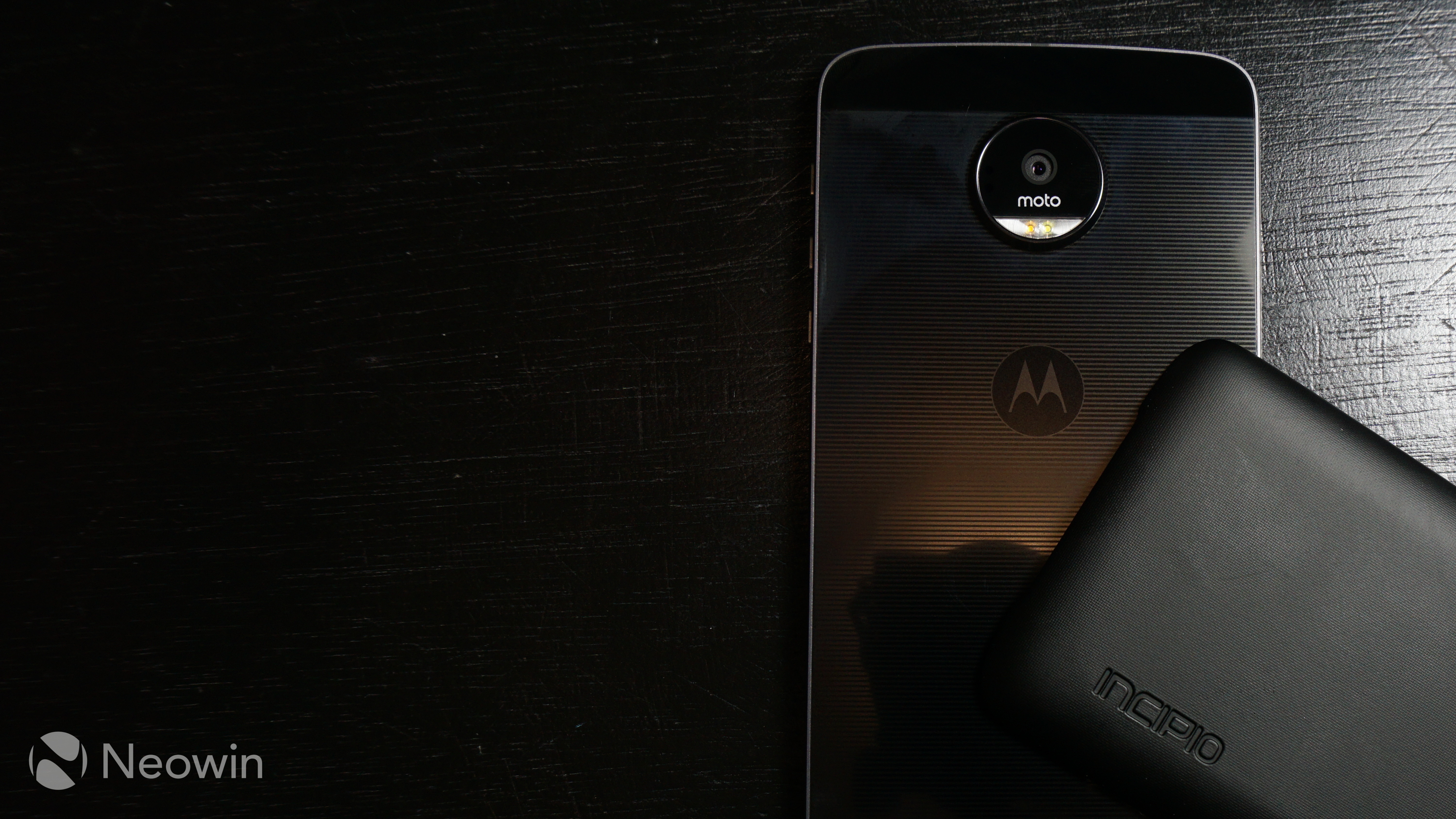 Moto Mods is one of the most interesting components of this year's Moto line, offering a new way to expand the capabilities of your smartphone. If this sounds familiar, it's because another company attempted this earlier in the year, but the results weren't quite on par with what we had hoped. 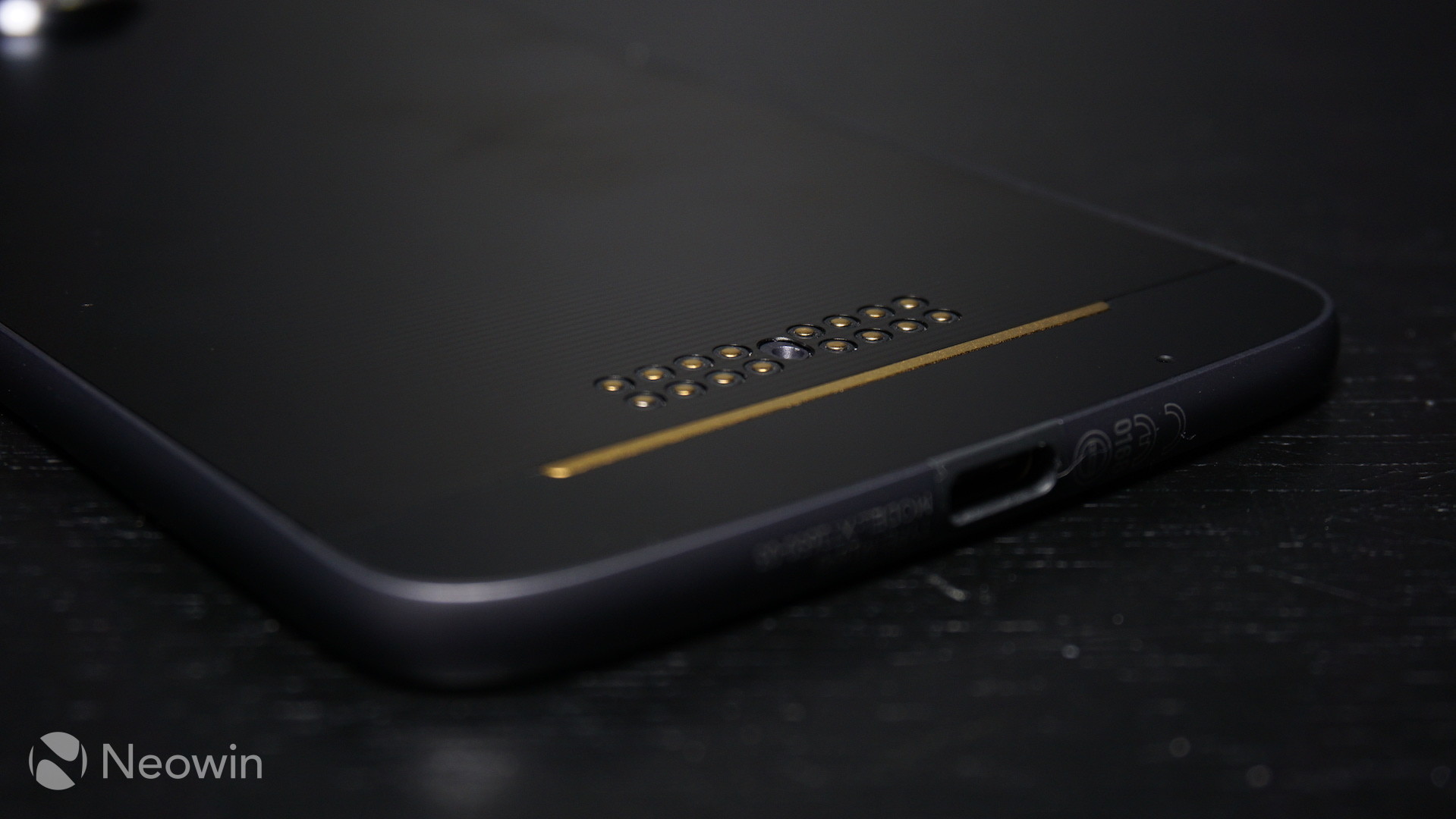 Lenovo offers a variety of different Mods that include a projector, a battery, and even a Hasselblad camera. While I'll be going into more detail in a future review, I can tell you that the one module I was able to test, the Incipio offGRID Power Pack, worked like a charm and enhanced the experience of the Moto Z immensely. If modular components are going to take off in the near future, Lenovo has hit the nail on the head with its interface and other manufacturers should take note. 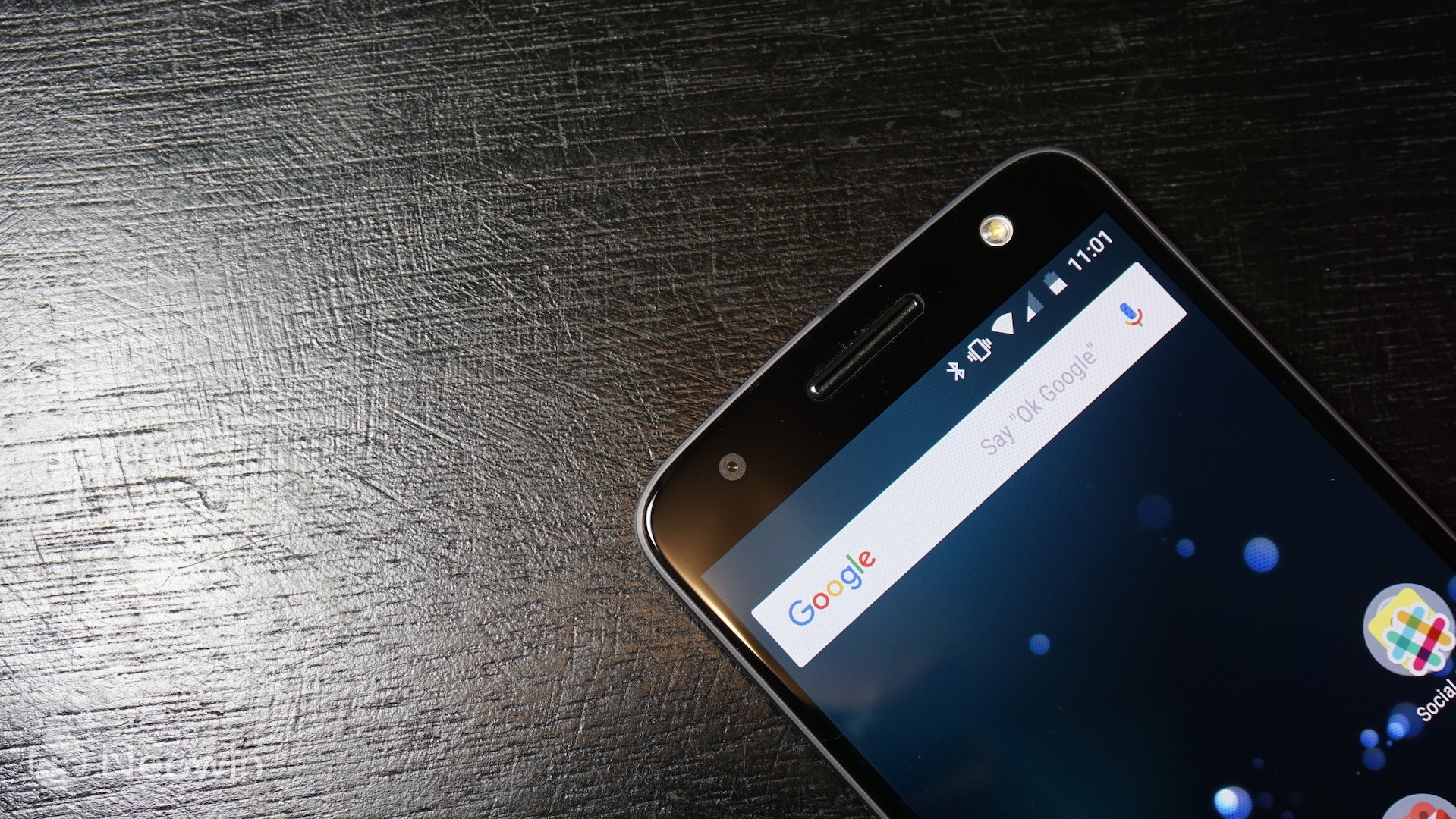 Let's be clear - the Moto Z is a pretty good device - but it does have some caveats. While the handset is snappy and the Android experience is close to stock, the camera and battery are two areas where the Moto Z fails to impress. While the camera software can always be tweaked in a later update, the battery will always remain the same, and 2600 mAh is simply not enough. While those that are on Verizon will have the option of going with the beefier Moto Z Force with a larger battery, there is no GSM equivalent of that handset. Instead, Lenovo's only option for GSM users is the Moto Z Play, that offers a larger battery, but at the expense of 1GB RAM, 32GB onboard storage, and a mid-tier CPU/GPU.

While $699 isn't an outrageous price for a top-tier handset, you really can't feel good paying that much for a Moto Z. While I wasn't expecting the Z to be the best, I was left expectingmore. If Lenovo wants to compete seriously with the likes of Samsung and LG, it needs to understand that before it can experiment with creative solutions, it needs to make sure that its core offering is rock solid. This is especially true when the mid-range offerings are becoming more competitive and priced far below the $600 mark. Although Lenovo is certainly off to a good start with this year's Moto lineup, it will need to refine and evolve its offerings to remain relevant. 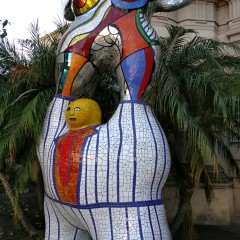 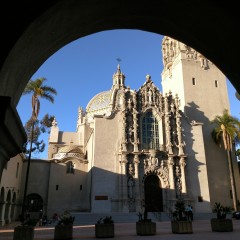 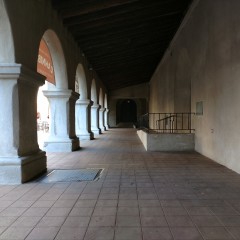 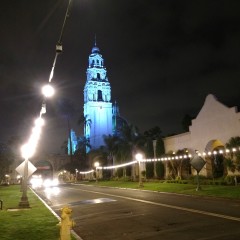 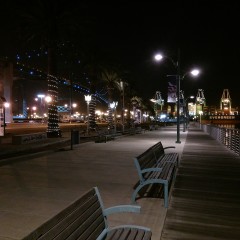 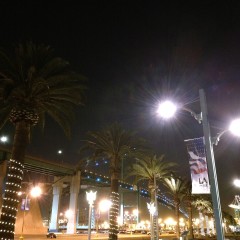 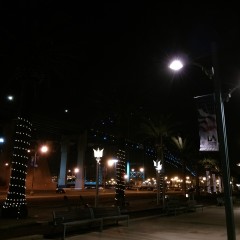 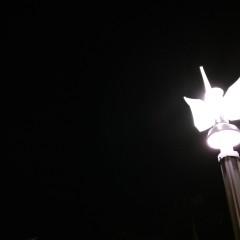