I am a proud member of Lycos Web Hosting but was a bit shocked today to receive a message through informing me I am being transferred due to the failure of gaining investment for Lycos to continue. So I looked into the story and found an article posted by Reuters that says Lycos Europe is losing money by the day and the only way to really save the company is by selling off some of its main assets which are the portal side of the company and the web hosting. 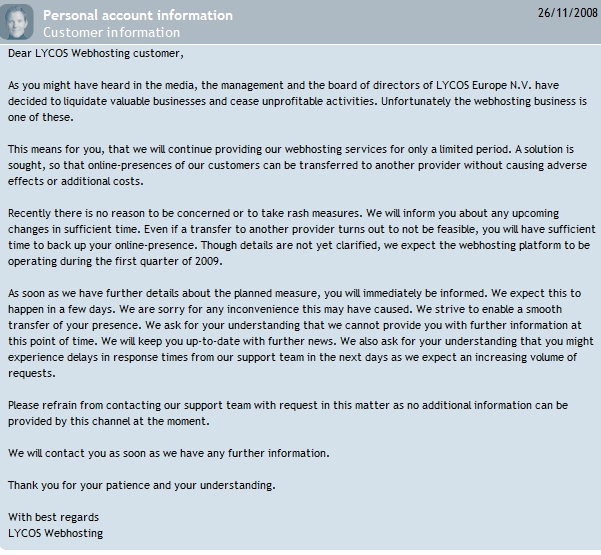 Lycos has been a household name on the internet since the big boom back in the late 1990's where it was founded by Dr Michael Loren Mauldin of Carnegie Mellon University, from then on Lycos grew and grew and in 1999 was named the Internet's most visited website. In 1999 came the change of ownership when Terra bought Lycos for $5.4 billion and renamed the company to Terra Lycos, but it was then sold again in 2004 to Korean company Daum Communications and renamed to Lycos Inc.

Lycos Europe has said they are looking for a US or Asian buyer to help them compete with the big names like Google and Yahoo in the search market.