It has been a big day for Microsoft and their mobile operating system, Windows Phone 7. Today Neowin was shown a preview of what to expect in the new version code-named “Mango” and overall the feature set looks extremely positive for the consumer.

Soon after people had taken their seats, Achim Berg the corporate Vice President for Windows Phone marketing stepped up to begin the talk in which he stated the purpose behind Mango. He listed the three main areas in which Microsoft hope to excel and the work they have put into Mango seems to represent those ideals. Communications, apps, and the web were the focus points that Mango hopes to improve in Windows Phone in hopes that it will make the user experience far better than that of their competitors platforms .

The first notable feature that was announced was the new multitasking capability that looks very similar to the alt+tab method to switch between windows used in the desktop OS. Multitasking was a feature everyone was expecting in Mango and it appears Microsoft has listened and implemented.

When the talk turned to a demo, IE9 was unveiled on the Windows Phone and given a HTML5 test VS an Apple iPhone. They both took the same test and IE9 managed 25FPS compared to the iPhone which was performing at 2FPS.

In addition, a new app was released from British Airways, an inevitable outcome with the Windows Phone having over 18,000 apps and 42,000 registered developers. The application is essentially a replacement for a paper boarding pass as it gives you the information of your flight along with a QR code. The feature to book and pick what seat you would like with help from a 3D view of the plane was a prominent feature of the app, one that the Microsoft representatives seemed very proud of.

As reported by Neowin earlier, they also confirmed the rumor that Mango comes with over 500 new features, enough to keep any Windows Phone user glued to their phone for a while.

It just so happens that with the launch of Mango, the upgrade will also give users in multiple countries the opportunity to get a hold of a Windows Phone as they plan roll the OS out to manufactures in countries such as Russia, Japan and Brazil. 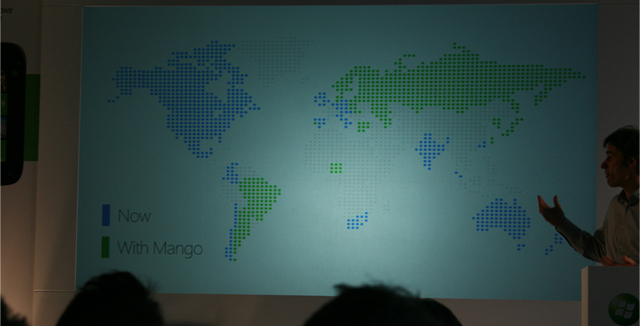 To conclude, Neowin learned that there are now three more manufacturers on board that will begin to develop their own handsets running the Windows Phone operating system; Acer, Fujitsu and Chinese manufacture ZTE. They also mentioned the partnership with Nokia who were responsible for selling 110 million smartphones last year.

Overall, the future looks bright for Windows Phone. With many new features on the table and new devices on the horizon, Microsoft is positioned to take back some marketshare.