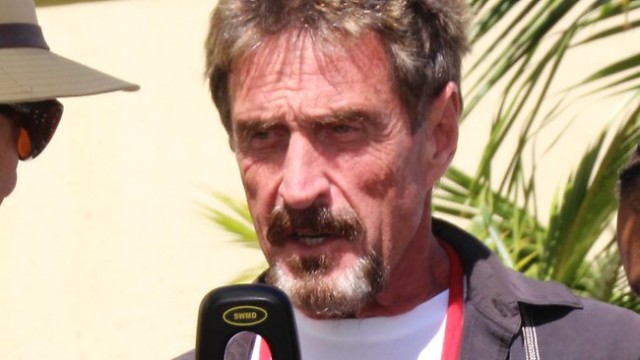 McAfee wants to "defeat the NSA" with Decentral.

Software guru John McAfee has announced a device- called “Decentral”-that could potentially block the NSA and other spy agencies from invading your privacy.

McAfee made the announcement over the weekend to around 300 software engineers, musicians and artists at the San Jose McEnery Convention Center.

The eccentric millionaire explained the pocket gadget will protect mobile devices from being accessed by creating a decentralised, floating and moving network that cannot be accessed externally. "Decentral" is reportedly capable of having a range of three blocks in the city, or a quarter of a mile in the country (400 meters).

"There will be no way (for the government) to tell who you are or where you are," he told moderator Dan Holden at the C2SV Technology Conference + Music Festival. He added if the US government was to ban its sale, "I'll sell it in England Japan, the Third World. This is coming and cannot be stopped."

McAfee said the device, which is aimed for primarily for commuters, was an idea that he had for a long time. After the Edward Snowden leaks, he knew it “became the right time” to produce it. The gadget will retail for around US$100. However, it may be a while until it is made available to the public seeing as the prototype is six months away.

For those of you who are unfamiliar with McAfee, you have probably heard of him in the past. Last year, we reported he escaped Belize after being wanted on suspicion of murder. His extravagant lifestyle and his eccentric personality has earned him the unofficial title of the tech world's wild child.

While it will be made available for both Android and iOS phones, there has been no mention of availability for Windows Phone- yet.