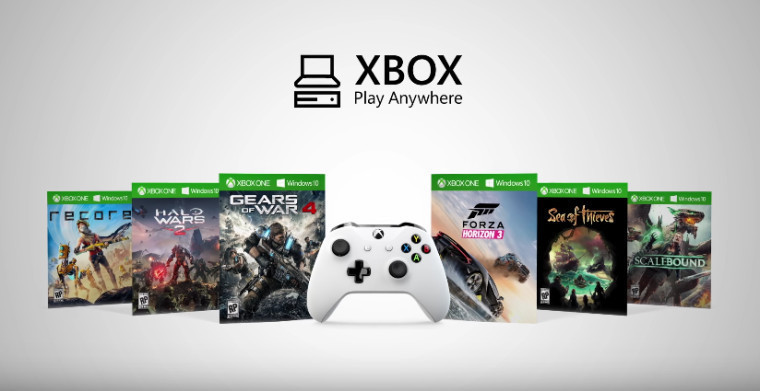 Microsoft made quite the splash during its E3 2016 press conference in Los Angeles, CA in June. While the announcement of a newer, more powerful Xbox console was the talk of the town following the conclusion of the press event, Microsoft's ambitious Xbox Play Anywhere pledge also raised a few eyebrows. With only two months to go before the feature officially rolls out, some controversy is brewing over the upcoming feature.

Spotted by Wayback Machine, Microsoft posted an article on its own website that detailed the Windows 10 Anniversary Update by highlighting several new features coming with the update, including Xbox Play Anywhere. Originally, Microsoft reinforced its dedication to Xbox Play Anywhere being available for all in-house games - a bold move. Yet, sometime after publishing the article on June 29, 2016, some of the information was changed.

Originally, one of the highlighted features of the article mentioned Xbox Play Anywhere as follows:

"Every new title published from Microsoft Studios will support Xbox Play Anywhere and will be easily accessible in the Windows Store."

Now, if you go back to the same published article, Microsoft has changed the wording so it reads differently:

"Every new title published from Microsoft Studios that we showed onstage at E3 this year will support Xbox Play Anywhere and will be easily accessible in the Windows Store."

With these recent changes to the article published by Microsoft, it reflects more accurately with what was mentioned on-stage at E3 2016: many exclusives will qualify but not necessarily all Xbox exclusives will be available on both Xbox and Windows 10. However you slice it, the company is not back-tracking on Xbox Play Anywhere; it's merely clarifying the intentions for it. You can read more about the Xbox Play Anywhere feature and the first games that will support it by clicking here.