Microsoft is still revamping its OneDrive cloud storage service a month after its name change from the old SkyDrive. This week, Microsoft announced that companies that have signed up with SharePoint Online can now increase the amount of cloud storage that each of its users can have from a maximum of 100GB to 1TB via OneDrive for Business. 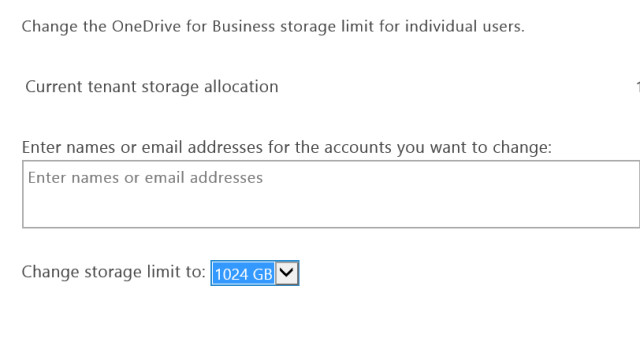 The SharePoint blog states admins can now select which users can get new upper limits on their OneDrive storage, from choices of 50GB, 100GB, 250GB, 500GB or 1TB. The blog adds:

The catch to this is once you exceed the default quota of 25GB for a user you will be pulling storage out of your overall pooled tenant storage allocation (10GB + 500MB x total number of users) in your tenant.

Earlier this month, Microsoft announced that it would offer OneDrive for Business as a stand alone service, apart from Office 365 and SharePoint Online subscriptions, beginning on April 1st.