Wearable computing devices are frequently touted as the next big thing in tech. We’re already seeing the first steps towards that next generation, with the likes of Samsung’s Galaxy Gear smartwatch and Google Glass among a growing number of devices that manufacturers hope will soon be as ubiquitous as mobile phones.

But wearable computing isn’t just about transferring the functions of a smartphone into a new form factor, and researchers across the world are already exploring how technology that people can wear may be used to transform our lives in ways beyond simply adding convenience. One such exploration has resulted in a ‘smart bra’, which its creators developed to aid research into stress-related ‘emotional eating’. 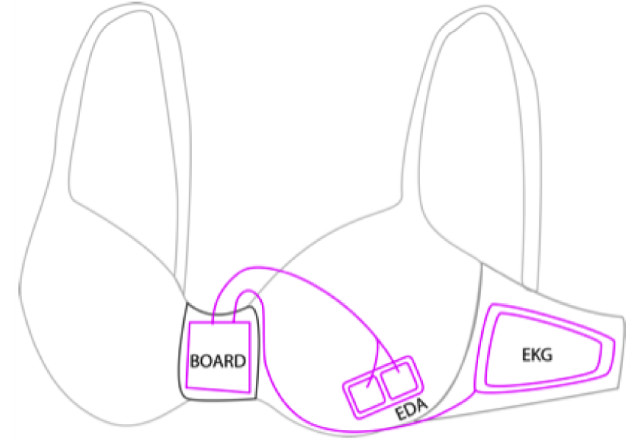 The prototype was created by Microsoft Research, in collaboration with researchers at the University of Rochester, New York, and the University of Southampton in the UK. The device contains electrocardiogram (EKG) and electro-dermal activity (EDA) sensors embedded within the bra, along with a two-axis gyroscope and three-axis accelerometer.

But why a bra? The researchers explained in their published paper:

We needed a form factor that would be comfortable when worn for long durations. We also needed a way to gather both EKG and EDA signals; so ideally, we wanted to collect those signals from the same wearable. The bra form-factor was ideal because it allowed us to collect EKG near the heart.”


The sensors were used to monitor heart-rate and skin conditions, with the data collected helping to form an impression of the user’s mood. A custom solution was created to collect sensor data called GRASP (Generic Remote Access Sensing Platform), which is described as “a real-time system…comprised of a physical sensor board, corresponding firmware, software libraries, and an API.” This system then transmitted data to a specially designed Windows Phone app via Bluetooth, and then backed it up to the cloud via Windows Azure. 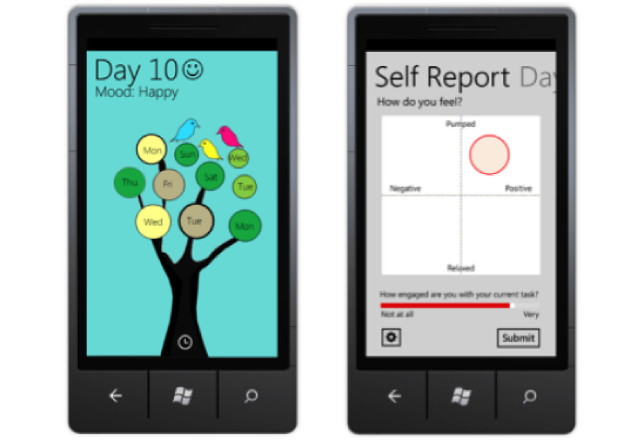 The app, known as ‘EmoTree’, serves up a default view indicating the user’s current mood. Swiping across the display reveals a 'Self Report' screen, asking the user ‘How do you feel?’ Users were prompted with reminders to log their mood every hour. 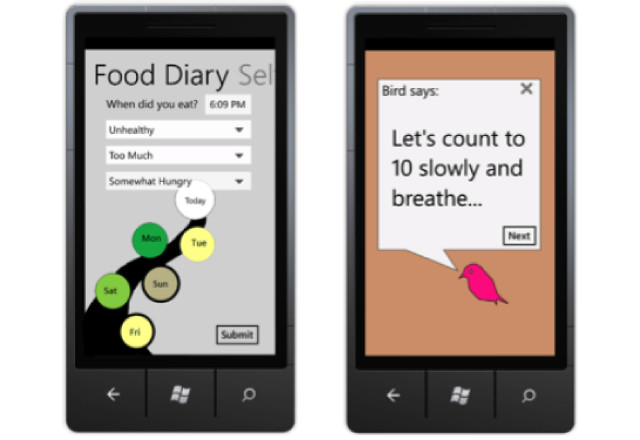 A further screen directed users to keep a record of what they ate, with each meal or snack adding leaves to the EmoTree. After logging their food intake, the app asked them what their emotional state was before eating. A final screen, known as “the intervention screen” directed the user to participate in a deep breathing exercise, tapping on the screen for each 10-second breath they took, ten times over.

When the app detected that the user was likely experiencing a stressful situation from the sensor data, the intervention screen kicked in before the user had the opportunity to eat. Its purpose was intended to “help move participants from a stressful state to a calmer state”, using a cognitive behavioural therapy (CBT) technique to invoke focused breathing to help reduce stress and make it less likely that the user would give in to an “emotional eating episode”.

The results, it seems, were mixed. 87.5% of participants reported that they “became more aware of their emotions” and how they related to their eating habits. But only 37.5% reported that their eating patterns changed as a result of the emotional awareness and logging of food intake. The sensors in the bra, meanwhile, performed well during the research period, with over 72% accuracy.

It should also be noted that the researchers were sensitive to the fact that 'emotional eating' is not purely a female phenomenon either but, as BBC News noted, creating a similar wearable device for men proved more troublesome, as the "the sensors were located too far away from the heart".

While there is clearly much work to be done on this project, and others like it, before we all find ourselves wearing clothes with embedded sensors that help us to engage in healthier lifestyles, the research carried out here offers a fascinating glimpse into the potential of wearable computing devices, beyond merely tweeting photos of your cat with the blink of an eye or reading emails on your watch.