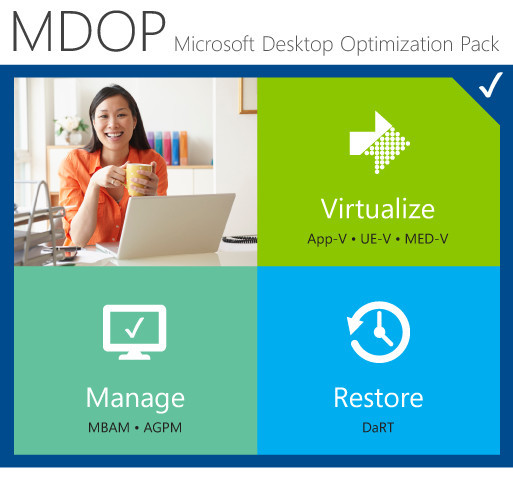 In April, the 2013 edition of the Microsoft Desktop Optimization Pack (MDOP) was released, offering large businesses new and better ways to manage their Windows software for their employees. This week, Microsoft released MDOP 2013 R2, just eight months after the release of the first 2013 edition.

In a post on the Windows Business blog, Microsoft says that MDOP 2013 R2 adds support for Windows 8.1, along with virtualization support for Office 2013. The pack includes Microsoft Application Virtualization (App-V) 5.0 SP2, which allows IT workers to send applications to any authorized PC without needing a direct download to each computer. The pack also has User Experience Virtualization (UE-V) 2.0 which lets users access different PCs without having to also change their applications or settings.

Microsoft says that it now has over 50 million MDOP customer licenses worldwide and claims that it has helped large companies become more efficient. The blog states:

IDC recently estimated that when MDOP solutions are fully utilized, the increased productivity and automation of systems can save an average company nearly $200 per PC per year. That’s a 36% reduction in annual cost. Coupled with productivity gains and elimination of third-party software, hardware and additional software licensing costs, operational savings can top $500 per year per PC.

An example of that kind of efficiency is Eastman Chemical's use of MDOP. Microsoft says that the amount of time the company took to deliver an application went down from two months to just two days thanks to using MDOP.