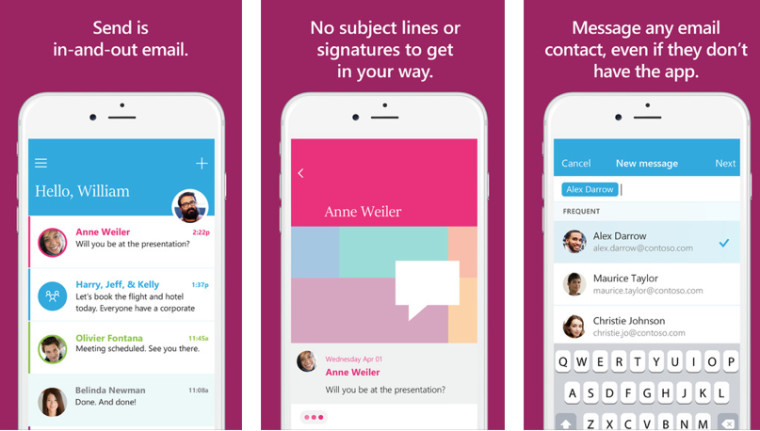 A few months back, we uncovered Flow, an app that was making the internal rounds at Microsoft and now the company is ready to let the outside world in on the action. The app, which has been rebranded as Send, is now available for iOS users and will soon be released for Android and Windows Phone as well.

The idea is quite simple: the service uses email as the backend infrastructure to create a messaging platform that is lightweight and only shows messages sent from Send in your list, rather than your entire inbox; Send messages will show up in your inbox on a PC. While the company says that the service works with anyone with an email address, currently you need a school or work account that uses Office 365.

The goal is to reduce the friction and time spent with email but at the same time, not lose the convenience of the service and infrastructure used by billions of consumers.

The application is part of Microsoft's 'Garage' incubator where ideas are created and brought to the world even though they may not be rolled into the company's larger portfolio of services; as a result, support for the apps may not be as long-term as for fully licensed products. Think of it more as an experimental development shop that kicks out apps on occasion to see how they resonate with users.

If you have an iOS device, you can check out the app now from the download link below.