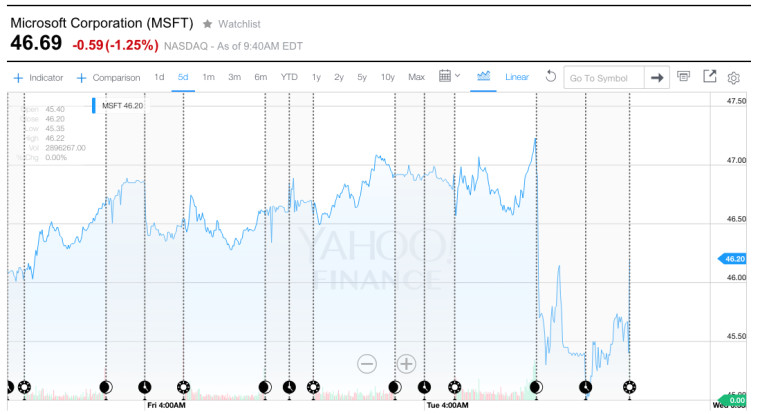 Microsoft announced yesterday its fourth quarter results, the company's fiscal year-end occurs on June 30th, and the results were less than spectacular. The company reported a loss of $2.1 billion but this was because of the write-down of of the Nokia assets.

Why did they have to write down the assets? In short, Nadella is saying that Ballmer overpaid for the asset and the value needs to be readjusted. While, at the current time, Microsoft's bank account was not impacted, what they are saying is that when they did buy the assets, it was the same as throwing the money into a fire pit and that it was a 'loss' at the time of purchase. Because of this, if you read anything on the Internet that says Microsoft had a really bad quarter, it's not founded in reality as the company did not actually lose $2.1 billion during this time period. But what did the analysts say?

Oppenheimer has reiterated its 'buy' rating on the stock as they are still bullish on the company for the long-term, while Citigroup believes that the stock should be sold, although they did boost their target price from $37 to $38. Jeffries group lowered their target price from $39 to $37 according to Tracour, which means the consensus of these three firms is a bit more bear-ish than bull-ish. Nadella will have some work to do for the first quarter of '16 to reassure Wall St. that Microsoft is still growing.

Still, the company's quarter was not great compared to last year either. This year, for the fourth quarter revenue was down from $23.28b to $22.2 and excluding the write down, operating income and EPS would have been $6.4 billion and $0.62, respectively. While not a bad quarter, it was not great either.