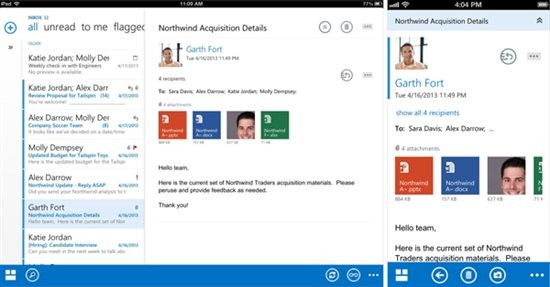 Outlook Web App for the iPad is on the left and the iPhone version is on the right.

Microsoft launched a version of Office 365 for iOS in June and today the company expanded that support with the release of new versions of its Outlook Web App made specifically as downloadable programs for the iPhone and iPad. Both versions require a current subscription to Office 365 with the latest update of Exchange Online to work.

Microsoft's Office 365 blog has the details on OWA for iPad and OWA for the iPhone. After you sign into the apps with your Office 365 account, you can start accessing the four main functions of the app (Mail, Calendar, People and Options) by tapping on the bottom left icon, which brings up a tile menu screen.

As you can see in the screenshot above, the iPad version of OWA has a two column view for email, while the iPhone has a one column design. The Calendar allows users to view upcoming events by the day, week, work week and month and also includes agenda views. The People functions let users sync their contacts automatically to the native address book on the iPhone and iPad. Finally, the Options portion allows users to manage any automatic replies and out-of-office messages, setting the time zone for the app and more.

The apps can also be used offline as well. Microsoft states:

You can read, delete and flag messages, as well as compose new messages or reply to messages in your inbox.  You can also view and edit your calendar and contacts.  This offline capability is especially useful when you need to access your email on a flight with airplane mode turned on or on a train with intermittent network connectivity.

While the iOS apps have all of the features of the web browser counterparts, it adds some additional functions that are not in the browser version, such as meeting reminders that even appear while the app is closed, push notifications for new emails and more.