With the official release of the RTM build of Windows 8.1 for TechNet and MSDN subscribers earlier today comes new versions of the in-house Modern apps that the company will include in the OS update. One of them is the new version of Skype, which will replace the Messenger app in Windows 8 when the update launches October 18th. 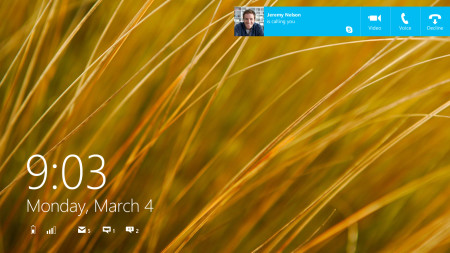 In a post on the official Skype blog, Microsoft says that the Windows 8.1 Skype app will allow users to call  a phone number that has been displayed on a website in Internet Explorer 11. The blog adds that the Skype app will automatically move into a Snap viewpoint when a link within Skype is clicked. The Snap view window can also be made bigger or smaller so that users can continue to work on another app while still chatting with the Skype app.

Skype on Windows 8.1 will automatically show any missed calls and/or instant messages, according to the blog post, and will also let people make phone calls from the Windows 8.1 lock screen or Start Screen. All in all, it sounds like the Skype app in Windows 8.1 could be one of the most used apps in the OS update.