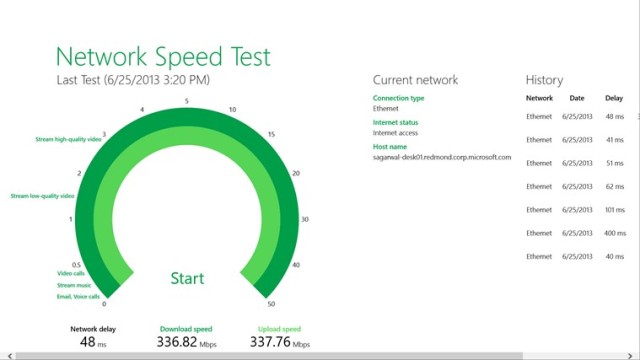 In June, Microsoft released the Network Speed Test app for Windows Phone 8, giving owners of those smartphones a quick and easy way to test the upload and download speeds on their network. Now Microsoft has released a port of that app for Windows 8 PC owners.

The Windows Store page for the app has the details on Network Speed Test, and it's basically got the same features as its Windows Phone 8 counterpart. In addition to checking on upload and download speeds, the app can also record data on packet loss, latency and more. It works on both WiFi and cellular networks and offers a warning if it uses the latter network in case you don't want to go over your broadband cap.

The app is designed so that its interface can show what sort of activities you can do with your particular wireless connection. Low network speeds mean you can email or stream low quality videos but the graph also shows when the speed is enough to stream higher quality videos.

Microsoft Research is using the app to help conduct its own studies on network quality. As with the Windows Phone 8 version, the Windows 8 port of the Network Speed Test app will send information on "certain characteristics of your device and the network connection" to Microsoft as part of their research. The app will also send info about a person's location while running the network test if they consent.