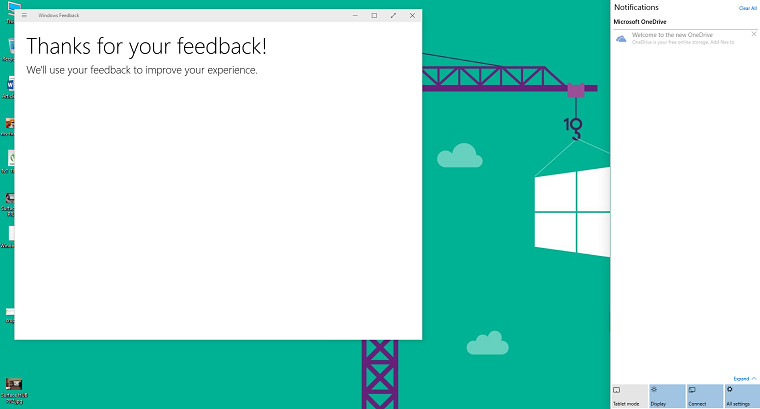 User feedback has been a large part of the development of Windows 10. Indeed, Windows 10 represents a drastic (and, after Windows 8's drastic failure, much needed) change for Microsoft in the way it builds its OS. Through the Insider Program, Microsoft exposed users to Windows 10 much, much earlier in the development cycle than it has ever done before and the feedback from those Insiders played a large role in the way the platform evolved.

While Microsoft started on this path through its UserVoice sites - for both Windows and Windows Phone - the company soon introduced the Windows Feedback app that was built into all Insider builds. Since then, the app has not only become an increasingly important tool for Microsoft but has also evolved significantly to the extent that Microsoft has decided to shut down the UserVoice sites and consolidate all feedback through the app.

With more than 110 million devices running Windows 10, we want to consolidate our feedback tools into one system that will enable our engineering team able to respond faster to the feedback from our community...Windows Feedback gives all engineers in Windows access to the complete set of raw feedback that users provide in the tool. Because it is plugged directly into our engineering system, it not only makes it easy for the engineers to find user feedback, but also makes it easy for them to act on it. Windows Feedback also enabled two-way conversations between engineers and our more than seven million Windows Insiders. This allows you to see if your feedback is in our systems, and ready to be promoted to a work item.

Though the sites are still currently accessible, they will be shut down by November 16. Insiders who wish to contribute their ideas to Microsoft's engineers may want to migrate to the Windows Feedback app before then.